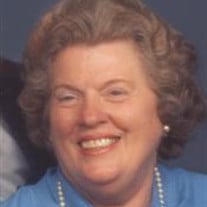 Helen Abbott Shurtliff, loving wife, mother, grandmother, and great-grandmother, passed away at the Alta Ridge Assisted Living Center in Sandy, Utah after a long battle with cancer. Helen was comforted and surrounded by the love of her family. As a wife and mother she enjoyed her life's journey and rejoiced in her posterity. Family, dear friends and the gospel were the joy and focus of her life. She was born in Pittsburgh, Pennsylvania, March 20, 1923, to Israel Abbott and Clara Savage Abbott. Helen graduated from BYU in 1945 with a degree in Bacteriology. She worked for three and a half years as a Medical Technologist at St. Mark's hospital in Salt Lake City. She met her dear husband, Robert Davidson Shurtliff during this time. They were married on May 23, 1947 in the Salt Lake Temple by President David O. McKay. Helen was active in the PTA and an active member of the LDS church in the Crystal Heights II Ward, serving in all organizations and in a variety of both Ward and Stake leadership positions. In their later years, Bob and Helen served an 18 month mission to San Diego, California as Public Communications Missionaries. They then served as tour guides at Welfare Square for several years. She taught her children to serve by her example. She served others her whole life, even as her own health was failing. She was always outgoing and friendly to all who crossed her path. In 2001, Helen and Bob had to move from their home of 60 years due to failing health and found friends at Highland Cove, then Atria, and finally at Alta Ridge. They wish to thank all the friends, doctors, and care givers who contributed to their quality of life. Helen is survived by her loving husband of 65 years, Robert Davidson Shurtliff; six children, Cheryl Johnson (Ron), Banning, CA, Sandra Ririe (Scott), Battleground, WA, Robert Wayne Shurtliff (Diane), Ammon, ID, David Abbott Shurtliff (Jean), Houston, TX, Barbara Madsen (Bruce), Sandy, UT and Annette Poulsen (Roy), South Weber, UT. Helen has 25 surviving grandchildren and 44 great grandchildren. She was preceded in death by her parents, Israel and Clara Abbott, a brother Lloyd Abbott and a sister Cecil Abbott Nesbit, and four grandchildren, Christopher William Johnson, Philip Kent Madsen, Kendall Bruce Madsen, and Jeanette Madsen. Services will be held at Sandy Utah East Stake, 9636 S 1700 E, Sandy, Utah at 11:00 a.m. on Saturday, November 19, 2011. Viewings will be held at the same location from 6 to 8 p.m. on Friday, November 18 and an hour before the services.

Helen Abbott Shurtliff, loving wife, mother, grandmother, and great-grandmother, passed away at the Alta Ridge Assisted Living Center in Sandy, Utah after a long battle with cancer. Helen was comforted and surrounded by the love of her family.... View Obituary & Service Information

The family of Helen Abbott Shurtliff created this Life Tributes page to make it easy to share your memories.