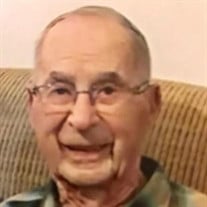 Henry J. Clements of Orem passed away on January 28th 2019 and was reunited with his dear wife Marjorie. He was born on September 25th, 1927 to John H. Clements and Olga Johansen Clements. Hank married Marjorie H. Harding, November 9th, 1951 at the Lake View Stake House. They were later sealed in the Salt Lake Temple. As they started their life together they settled in the city of Orem where they began their loving family. They had a son, Scott; a daughter, Michelle; and another son, David. Marge preceded him in death on August 3rd, 2014 after 63 wonderful years together. They loved to do everything together, including traveling all over the Western United States in their trailer, motorhome or by car. Hank was a member of The Church of Jesus Christ of Latter-day Saints, at the time of his death he was a High Priest and had served in many callings in the church and was dedicated in serving the Lord. In his early years he loved to hunt, fish and camp with his friends and family. Hank loved all sports and was very involved in many of them winning many trophies in golf, softball, bowling and horse shoes. At just 18 years old he became the Utah state champ for pitching horse shoes. Christmas was his favorite time of year, being with his family, including Christmas parties with his children, grandchildren, and great-grandchildren. Hank was hard working and was employed with various companies early in his years but found his career as a store/sales manager for Pyke Mfg Co. from which he retired after 25 years. He also spent 10 years as a courier for Bank of American after his retirement. After retiring Hank and Marge started traveling over the Western United States and ended up being snowbirds in Yuma, Arizona several months each year. In his final years he spent time working in the yard, walks with his dog, Coco, in the park, and enjoyed receiving visits from his grandchildren and great-grandchildren. Hank is survived by his two children Michelle (Steve) of Ferron UT, Dave (Cindy) of Provo UT, 11 grandchildren and 30 great-grandchildren. He was preceded in death by his son R. Scott Clements of Casper, WY. Graveside services will be held Friday, February 1, 2018, 1:00 pm at the Provo City Cemetery, 610 S. State Street, Provo, Utah.

The family of Henry J. Clements created this Life Tributes page to make it easy to share your memories.