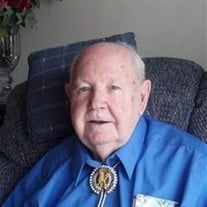 Herman Hughes Quire 1932 - 2016 Herman Hughes Quire, 84, passed away peacefully in his home surrounded by angels and his daughter’s loving arms on July 17, 2016. How great must have been the reunion in Heaven with his sweetheart of 57 years Mary, our Mother, Grandmother, Aunt and Friend whom he married in the Manti Temple of the Church of Jesus Christ Latter-Day Saints on April 20, 1952. Together they walk in eternity, whole, young, free from pain and joyful in the knowledge of eternal life. Herman was born in Louisville, Kentucky on May 21, 1932 to Herman Cecil Quire and Ruby Beauty Nethery Quire. Herman LOVED life and spending time in the company of family and friends. He had a huge, kind heart and gentle soul and was incredibly social! He could be found at a nearby coffee shop eating breakfast and enjoying people, attending church meetings, home teaching, or sitting in the lobby of his home, laughing and talking to everyone that happened to come by. He often served others, providing rides, trips to the grocery store, offering advice and giving blessings. He loved to go out to eat and thoroughly enjoyed dining regularly with family and close friends. In his most recent years, he also loved to play Wii bowling and bingo, participate in facility activities, watch movies on the big screen, play the parachute game, kick ball and sit outside and enjoy the sunny weather. He enjoyed watching parades and fireworks and had a true zest for life! Everyone who knew Herman knew they could usually find him relaxing in his recliner, cheering for his favorite teams! Whether it was his beloved Denver Broncos, Colorado Rockies, Chicago Cubs, Utah Jazz or Utah Utes, it didn’t matter. He was always cheering them on as their number one fan! Herman loved baseball most of all and in his younger years, was an avid baseball and softball player and umpire himself, participating in both church and civic recreation leagues. As a father, Herman was very active in the raising of his children Tammy and Maurio. As children, he would always take us kite flying and picnicking in the park, sledding, swimming, fishing, to ball games, carnivals, fairs and amusement parks, road trips to Oregon and many places along the west coast and on visits to see grandparents and family every weekend and holiday. He taught us to have fun, enjoy life, love deeply and respect the value of family and friendships. Herman was a very talented artist and could be found sketching the faces of everyone he knew and sometimes of those he didn’t. Sometimes he sketched those faces on paper napkins at restaurants, on tiny pieces of paper or on regular sketch paper. He had a knack for capturing the spirit seen the eyes of each individual he drew. Herman always had the biggest smile and his eyes would just light up and twinkle when he talked about good times and when he was full of mischief, which was more often the case! He enjoyed wearing fun Hawaiian shirts, his hat and eagle bolo tie and his favorite color was blue! Herman has two children, Tammy Maria Barber (Adam Barber) Lehi, Utah and Maurio Hughes Quire, West Valley City, Utah. He also has four grandchildren, Daniel John Allgood, Kellie Marie Winteron, Barry M. Winterton and Robert Khody Allgood and five great-grandchildren, Mia, Belle, Ashton, Micah (whom he affectionately called little Herman) and baby Ruby. He is preceded in death by his sweetheart Mary Bell Quire, his parents, and his sister Ruby Brown. Funeral services will be 11:00 am, Friday, July 22, 2016 at The Church of Jesus Christ of Latter-day Saints chapel, 300 North 100 East, Lehi, Utah with a viewing prior to services from 9:45 to 10:45 am. Interment in the Pleasant Grove City Cemetery, 500 North Main, Pleasant Grove, UT

Herman Hughes Quire 1932 - 2016 Herman Hughes Quire, 84, passed away peacefully in his home surrounded by angels and his daughter&#8217;s loving arms on July 17, 2016. How great must have been the reunion in Heaven with his sweetheart of 57... View Obituary & Service Information

The family of Herman Hughes Quire created this Life Tributes page to make it easy to share your memories.