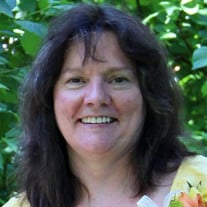 Holly Jo Fox Hartley Holly Jo passed away at home in Salt Lake City, UT on October 29, 2015. She was born to Lyle Davis Fox and Sharon Jean Cox Fox on October 23, 1962 in Salt Lake City, UT. She was the third of four children. She married Scott Hartley in 1980. They were married for eight years and had one daughter, April Jean. She spent many of her working years as an inventory auditor, which gave her many travel opportunities. In 1995, she met Richard McNichols and they spent the next twenty years together until her death. They were a great match for each other and she was very happy. She loved taking trips with him and they traveled and went camping in many different places. She became a grandmother in 2009 and again in 2013 and being a grandma became what she did best. She would show up to visit with her “granny bag” and it always had snacks or a game to play or anything she came across that she thought the grandkids would like. Her grandchildren loved to play hide and seek and their own version of dominoes together with her. She adored her grandchildren and talked about them to anyone and everyone that would give her the chance. Spending time and keeping touch with distant family was always important to her. She called her sister and nieces and nephews that live across the country on a regular basis. She was also the one to send care packages to her brother Jeff in Colorado. She had fond memories of time spent in Castle Dale and liked to go back and visit there. She loved to read, listen to loud rock music, do crossword puzzles, travel to new places with Richard, and play with her grandchildren. Holly was preceded in death by her parents Lyle and Sharon Fox. She is survived by her husband, Richard McNichols, daughter April (Jayson) Webb, sister Wendi Kelley, brothers Jeffrey Fox and Brendan Fox, nieces Krystal Whitaker and Heather (Cody) Mears, nephews Robert (Melissa) Fox and Steven (Martina) Wiggins, grandchildren Braxtyn Webb and Kaylah Webb, and “adopted” grandson Trystin Holman. Holly loved to read, especially to her daughter, and later to her grandchildren. In her memory, the family asks that you find a book and read with someone you love. A viewing will be held on Thursday, November 5, 2015 at Arbor Manor at 2888 West 4700 South, Salt Lake City, UT. Burial will be Friday, November 6, 2015 at noon at the Castle Dale Cemetery.

The family of Holly Jo Hartley created this Life Tributes page to make it easy to share your memories.

Holly Jo passed away at home in Salt Lake...