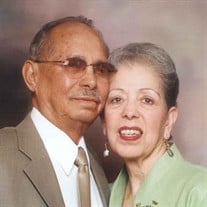 Hope Nabor “Eternally Together” “Do not weep for me for I was not alone. Your dad was waiting when it was time for me to go. I let you know when he arrived and we walked together to Heaven’s kingdom holding hands side by side.” Hope was born to Tomas and Nellie (Martinez) Nevarez on October 3, 1942 in Standardville, Utah. She married Ernest Nabor on February 22, 1958 with whom she shared fifty-four loving, wondrous years before his earthly departure on November 7, 2012. Their marriage was eternally sealed in the Ogden Temple on October 7, 2008. Hope led a meaningful, fulfilling life with her family and friends. Some of her most memorable moments were family meals on Wednesday night, family reunions, discussing family history and dancing with “her little monkeys” (grandchildren) in the kitchen. Hope was loving, supportive and accepting of all individuals. She was truly an example of self-less love. Hope and Ernie always had an open door, open table and open mind. We will miss her stylish dress (always matching purses and shoes) and her good conversation and good company. Hope had a testimony of the Plan of Salvation. Surviving are her children, Steve (Deb) Nabor, Michelle (Greg) Williams, Georgia (Don) Leavitt, and Nickie (Lamont) Youngberg, 13 grandchildren and 21 great-grandchildren. She is also survived by her siblings, Thomas Nevarez, Andrea Martinez, Cynthia Archuleta, Toni (Gilbert) Archuleta, Chris Nevarez and Vickie Mosby. She is preceded in death by her husband, parents, brothers, Kenny Nevarez Sr., Emilio Nevarez, Tomas Nevarez Jr., Fermin Nevarez, sister, Cindy Lucero and 2 great-granddaughters. Funeral services will be held Tuesday, January 3, 2017, 11:00 am at the Sunset 2nd Ward, 220 W. 975 N. Sunset, with a viewing Monday evening from 6 – 8 pm at the church and 9:30-10:30 am prior to services Tuesday. Interment, Clearfield City Cemetery. On-line condolences may be left at www.premierfuneral.com.

Hope Nabor &#8220;Eternally Together&#8221; &#8220;Do not weep for me for I was not alone. Your dad was waiting when it was time for me to go. I let you know when he arrived and we walked together to Heaven&#8217;s kingdom holding hands side... View Obituary & Service Information

The family of Hope A. Nabor created this Life Tributes page to make it easy to share your memories.