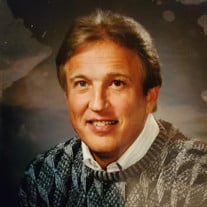 Hubert George Smith (Hugh, Uncle Sonny) died July 15th, 2020, after a battle with Pulmonary Fibrosis. He was born in Salt Lake City, Utah, September 20th, 1943 (76yrs) and was raised in Milford, Utah. He graduated from Milford High where as an accomplished athlete. He lettered in Football and Track and played basketball and baseball. He was a "diehard" Utah Jazz fan and enjoyed watching football and baseball games. He especially enjoyed visiting Yankee Stadium where he got to watch the Baltimore Orioles pitch a rare no-hitter against the Yankees! He attended Utah State University where he was an active member of Sigma Phi Epsilon Fraternity, earning a bachelor’s of Science in Psychology with a minor in Sociology. He continued his education earning a Masters of Education in Counseling Psychology and Curriculum Development 1967. Then earning a 2nd Masters of School Administration from Utah State University 1970. He paid his way through college working summers for the Union Pacific Railroad. Later, he attended BYU University where he earned a higher degree as an Educational Specialist 1979. Hugh spent the majority of his career as a guidance counselor for Weber School District working at multiple schools including North Ogden Jr. High, Roy High and Weber High . He was a gifted and influential counselor whose calling led him to help youth. It was not uncommon for him to be approached in the Mall or Grocery store by the parent of a student he had helped. The conversation always went something like: "Mr. Smith, thank you so much for helping my Son/Daughter. He/She would never have graduated without your help!" He also "moonlighted" as a field supervisor for training undergraduate sociology students for The University of Utah with Thiokol's Job Corps. At Job Corps he took kids from U.S. inner cities on field trips that exposed them to experiences they never had before, i.e. Mountains, Fairs. He helped a lot of young people head down a better path with his dynamic personality and understanding of their unique situations. He was also a eloquent, enthusiastic teacher who taught personal development psychology in adult night school. Hugh a had a larger than life personality and presence. People didn’t forget him after they met him. His passion was boating and he owned a variety of different boats right up until this year. Lake Powell was his favorite boating destination. He also had a love for animals and enjoyed pets most of his life. A Broadway fan, he attended live theatre shows in both New York City, and London's West End. He was a life-long lover of music and often dabbled with playing guitars and keyboards. He enjoyed traveling, specifically cruises. He visited multiple countries in Europe, as well as Mexico, Hawaii and Alaska. After retirement, he enjoyed home projects, following politics and playing Mexican Train Dominos at the South Ogden Senior Center, where again he was well known due to his big personality . He is survived by two daughters, Kristin and Allison, and a beloved Granddaughter Alexa (14 yrs). Two former wives: Dorothy {Mother of his Daughters}, and Linda. They were both kind and patient with him until the day he died. He is also survived by his oldest sister, Dorothy Colleen. He was preceded in death by three older sisters, Norma, Clara, Anita and a stillborn daughter Elizabeth. Please join us at 6 pm August 14th at Sandridge Park, 2100 W. 4475 S. in Roy for a celebration of Hugh’s life. If you would like, please bring a dish or dessert to share, your own drinks, along with a joyful experience or story about Hugh. Cold cuts will be provided. We will be adhering to social distancing practices so we need all attendees to wear a proper mask or face covering. We also greatly encourage you to wear a face shield and gloves if you are at high risk. Please do not sit directly next to anyone not currently living in your household to eat. Please direct any questions or need for directions to Kristin.

Hubert George Smith (Hugh, Uncle Sonny) died July 15th, 2020, after a battle with Pulmonary Fibrosis. He was born in Salt Lake City, Utah, September 20th, 1943 (76yrs) and was raised in Milford, Utah. He graduated from Milford High where as... View Obituary & Service Information

The family of Hubert George Smith created this Life Tributes page to make it easy to share your memories.