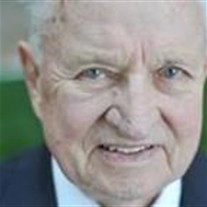 Hugh Lynn Oldham 17 February 1928 – 22 May 2016 Orem, Utah – Hugh Lynn Oldham, 88, passed away Sunday, 22 May, 2016, due to complications incident to age. Many pass from this life into paradise, however, a select few are fortunate enough to be born in Paradise. Hugh Lynn Oldham was born at a very young age, 17 February, 1928, in Paradise, Utah, to Edward Price and Annie Oretta Obray Oldham. Growing up on the family farm in Paradise, Lynn learned the ethic, value, and satisfaction of hard work, a trait that would define him the rest of his life. He hauled hay, milked cows (six or seven, both morning and night), mended fences; there were always chores to do around the farm. He didn’t really like milking cows, but he “did a lot of it.” Lynn remembers fracturing his clavicle and, for a time, milking six cows using just one hand. Since television was not available, Lynn’s spare time was spent reading books and listening to radio programs. In particular, he enjoyed programs like Jack Armstrong, All American Boy and Little Orphan Annie. Because Jack Armstrong ate Wheaties, Lynn also ate Wheaties. His favorite book was Little Britches. Along with his responsibilities on the farm, Lynn also remembers many carefree days riding horseback in the surrounding hills, hunting squirrels and swimming in his favorite swimming hole. Lynn graduated from South Cache High School in 1946. That summer, Lynn worked harvesting trees for a lumber company using a two-man saw to fell the trees. Felling a large tree one day onto the foreman’s parked car ended his career as a lumberjack. He next worked that summer in Evanston, Wyoming, digging a railroad tunnel. Lynn was a veteran of World War II. Lynn joined the United States Army September of 1946. He trained for three months at Fort Bliss, Texas, and was subsequently sent to Japan as part of the Allied occupation force in Japan. He spent one year in Japan before returning home. At the time, he never could have imagined or anticipated returning to Japan as a missionary. Lynn was a member of the Church of Jesus Christ of Latter-day Saints. At the age of eight, he was baptized in the Logan temple baptismal font. Lynn served as a missionary for three years in post-war Japan (The Japanese Mission), 1949 – 1952. In 1952, soon after his mission, Lynn met the love of his life, Nancy Wiscombe. After a short courtship, Lynn proposed to Nancy in the Paradise city cemetery. They were married in the Salt Lake City Temple, Friday, 19 December, 1952. Lynn attended Brigham Young University from 1952 to 1953. Due to some unusual circumstances, Lynn and Nancy moved to New York City in September of 1953, where Lynn attended New York University. Lynn graduated with a bachelor’s degree from Brigham Young University in the spring of 1954 and two weeks later, he graduated from New York University with a Masters of Business Administration. While attending NYU, Lynn worked at Wannamaker’s, a large department store located in the heart of New York City. Out of school, Lynn accepted a position with JC Penny Corporation department stores. His career at JC Penny took the family to Logan, Utah; Salt Lake City, Utah; Casper, Wyoming, and Denver, Colorado. In Denver, Lynn was Operations Manager where he managed fourteen stores for JC Penny. In 1972, Lynn was transferred to Orem, Utah, where he helped manage a JC Penny store under construction at the new Orem University Mall. It was during this time Lynn and Nancy decided to open their own store in the same University Mall. Their initial store was a 4200 square foot franchise gift store, Hatch’s Gift Shop. Hatch’s opened 7 March, 1973. Later the Hatch’s franchise was replaced with Lynn and Nancy’s own gift shop, Cloud Nine Gifts. In 1973, Lynn, Nancy and their family consisting of six children moved from Denver, Colorado to Mapleton, Utah, where they built a beautiful home on two and one-half acres of land. The family raised much of their own food on that little farm—meat, eggs, milk, vegetables, etc. Lynn also raised (“beautiful”) Arabian horses. In March 1993, Lynn and Nancy closed Cloud Nine Gifts and retired—a hard decision to make. After retiring, Lynn was employed for a time by Provo School District to drive a school bus, which he enjoyed. Lynn served in many Church callings, including Sunday School teacher, bishopric counselor and ward Executive Secretary. In 1994, Lynn and Nancy were called to serve a mission for the Church of Jesus Christ of Latter-day Saints to the Japan Sendai Mission. Their time in Japan allowed them to enjoy some of the most memorable experiences of their lives. Lynn loved golfing, camping and hunting. He enjoyed hunting antelope in the prairies around Casper, Wyoming, and elk in the mountains of Denver, Colorado. His most memorable hunting trip was hunting moose in Canada. Lynn’s greatest joy was his family. He had a great love for the gospel of Jesus Christ. He was a man of great faith and possessed a deep love for his Savior, Jesus Christ. He will be missed as brother, husband, father, grandfather and great-grandfather. Lynn was preceded in death by his parents; sisters, Edna Oldham Ohlwiler and Helen Oldham Olsen; brothers, Max Oldham, Thaine Oldham and John Oldham. Lynn is survived by his eternal companion, Nancy Wiscombe Oldham; one brother, Mark Oldham; six children, Kathy Oldham Edmunds (Frank), Tom Oldham (Patti), Debbie Oldham Clement (Steve), Peggy Oldham Park, Doug Oldham (Karri) and Jim Oldham (Shoni); 35 grandchildren and 82 great-grandchildren. The family would like to express sincere, heart-felt gratitude to Debbie and Steve Clement for the loving, full time, care they extended to Lynn in their home during the past sixteen months, as Lynn’s health declined. Services will be held at 12:00 noon, Thursday, 28 May, 2016, at Canyon View Stake Center, 575 East 800 North, Orem, Utah. There will be a viewing prior to the services beginning at 10:00 am. Lynn will be interned at Utah Veterans Memorial Park at Camp Williams, Bluffdale, Utah. In lieu of flowers, please bring chocolate, nuts or Mountain Dew!

The family of Hugh Lynn Oldham created this Life Tributes page to make it easy to share your memories.