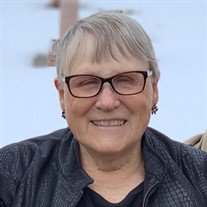 Ila Laree (Lewis) Elizondo, age 79, died peacefully Thursday, April 8, 2021, in Heber City, Utah. Laree is preceded in death by her husband, Jay Emmett Elizondo and her great-grandson Moose Rogers Woolstenhulme. Laree is survived by her son James Elizondo of Fort Wayne, Indiana (wife Mary Ellen and children Emmett, Aiden and Anya); and daughter Gwen Woolstenhulme of Orem, Utah (husband Roger and children Seth and his wife Jenn, Bree and her husband Taylor Wilkins, Sy and Bain); and two great-grandchildren Taytum and Anzley (Seth); and Laree’s sister, Nila Clulow of Scottsdale, Arizona. She was born December 14, 1941 in Oberlin, Kansas. She was the daughter of Ila Roberta Sawdon and Sydney Floyd Lewis. She spent much of her childhood with her grandparents in Fruita, Colorado In 1960, Laree graduated from Fruita High School, Fruita, Colorado. She studied business at Stevens-Henager College in Provo, Utah. Laree and Jay were married on June 9, 1960 in Manti, Utah. They raised their two children, James and Gwen in Fort Wayne, Indiana. Laree worked as an administrative assistant in Fort Wayne public schools while her children were growing up. She later worked as an administrative assistant for General Dynamics in Detroit, Michigan. Laree lived in Fort Wayne, Indiana, Ogden, Utah, Warren, Michigan and retired in Henderson, Nevada. In 2020, she moved to Orem, Utah to be closer to Gwen and her family. She was a member of the Church of Jesus Christ of Latter-day Saints. Laree was devoted to her husband, family, grandchildren and great-grandchildren. Her greatest joy was being “Granny” to her seven grandchildren. She loved attending their activities and hearing about their accomplishments. She also enjoyed her Bunco group, Lunch Bunch, and exercise classes with her friends in Henderson. She volunteered for several years at a local elementary school in Henderson helping children learn to read. A private memorial service will be held Saturday, April 17, 2021 at the New Elmwood Cemetery in Fruita, Colorado. James and Gwen would like to thank their family, friends and neighbors who have offered their help, love and support during this difficult time.

The family of Ila Laree (Lewis) Elizondo created this Life Tributes page to make it easy to share your memories.