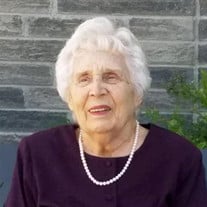 Ina Eunice Huntsman Squire Ina Eunice Huntsman Squire, angel wife, mother, grandmother and great grandmother quietly slipped away to her heavenly home on October 3, 2018. She lived the gospel as a faithful member of the Church of Jesus Christ of Latter-day Saints. Her greatest mission and calling in life was raising a righteous family. She was a constant source of light to her children and friends despite living for many years in blindness. Ina was born May 3, 1927 in Torrey, Utah. She was the daughter of James Clarence Huntsman and Myrtle Voilet Morrill Huntsman and the fourth of five children. She attended Snow College, USU, and BYU, and although she never graduated from college she was always learning. In addition to her schooling she served a mission in the Central States. While at BYU she met Meade Squire and on February 27, 1953 they were sealed in the Manti temple for time and all eternity. They had twelve children who became their life work and pride and joy. Ina was a homemaker who put family first in everything. She was a loving mother and taught her children to love the gospel, to work hard, and to serve the Lord. Her church callings have been many and varied throughout the years. She served in the Primary, Sunday School, Young Women, and Relief Society presidencies and taught Gospel Doctrine. However, her crowning calling was to serve in the Manti Temple as an ordinance worker which she did for 14 years. Later in her life she served a mission with her sweetheart in the Canada Halifax Mission. Ina is survived by her children: Dianne (Don Christensen), Rosemary (Doug Cornish), LaRee (Boyd Parkinson), LuAnn (Daniel Adams), Janet (Paul Muehlmann), Sandra (Kevin Steele), Susan (Eric Harrison), John (Monique Luster), Glen (Stacey Shelley), Richard (Roxanne Nalder), Ralph (Annette Cox) and by her sister Rhea (Lars Nelson). She was preceded in death by her husband Meade and her son David (Alison Weed), her mother Myrtle and father James, her brother Lavar (Lillie Rymer), and sisters Joy Clarke, and Zella (Merrill Snow). Funeral services will be held 12:00 Noon, Monday, October 8, in the Ephraim 6th ward chapel, 450 N 200 W, Ephraim, UT a viewing will be held prior to services from 9:30 to 11:30 am. Interment will be in the Manti City Cemetery. In lieu of flowers please donate to the Church’s General Missionary fund.

The family of Ina Eunice Huntsman Squire created this Life Tributes page to make it easy to share your memories.