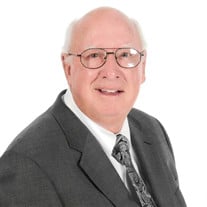 Ira Jim Egbert Jr. “IJ” passed away peacefully in Bountiful, Utah on July 22, 2019, surrounded by family, after a short battle with pancreatic cancer. IJ was born on August 28, 1939, the oldest son of Ira Jim Egbert and Bernice Larna Rigby Egbert, at home in Kaysville, Utah. He grew up on the family farm, on Mutton Hollow Road, where he learned his high values and work ethic, from his parents. He was a lifelong member of the Church of Jesus Christ of Latter-day Saints. IJ graduated from Davis High School. He served in the Army National Guard at Fort Ord, California; then was later based at Fort Douglas, Utah. He married Mary Lynne Petro on August 14, 1959, in the Salt Lake Temple, together they had 4 daughters. They were later divorced. He worked for Mountain Bell/US West as a line man and later a supervisor and manager. He married Peggy Howick Nish on September 25, 1987; they were sealed in the Bountiful Temple on September 25, 2018. IJ loved Bear Lake, building a cabin there and enjoying it for over 50 years. He spent many summer days boating and water skiing and nights around the campfire. He loved to share his heaven on earth with friends and family and his cabin was always a lively place on weekends. He was instrumental in developing the water system that provides culinary water to the south end of the lake to this day. IJ and Peggy loved to travel and visited many countries as well as much of the U.S. in their motorhome. He loved all types of racing, traveling to many races, especially the Indianapolis 500 and NASCAR races in Phoenix and Las Vegas. IJ was meticulous in the way he maintained and cared for his vehicles, yard, home and cabin. In his younger years he spent his winters snowmobiling, always loyal to Skidoo. He is survived by his Wife Peggy Bountiful, sister Bonny Soltys Kaysville, brother, Blaine (Carol) Egbert Goodyear, AZ, three daughters, Tracy Allen (Norm) Brigham City, Tammy Nuttall (John) Layton and Trudy Moulton (Dallas) Kaysville and three stepsons Mike Nish Centerville, Jeff Nish (Melanie) Centerville and TJ Nish (Heather) Indianapolis, IN, 17 grandchildren and 10 great-grandchildren. He was preceded in death by his daughter Tiffany and Parents Ira and Bernice. Funeral Services will be held at the Val Verda 4th Ward 2633 S. 50 W. Bountiful, Utah on Monday, July 29 at 11 o’clock am. A viewing will be held on Sunday, July 28 from 6-8 pm and on Monday, July 29 from 9:30-10:30 at the Val Verda 4th ward 2633 S. 50 W. Bountiful, Utah. Interment will be in the Laketown, Utah Cemetery. In Lieu of flowers please make donations to the American Cancer Society.

The family of Ira Jim Egbert Jr created this Life Tributes page to make it easy to share your memories.