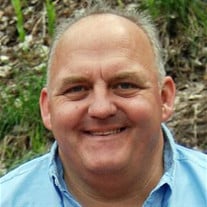 August 5, 1959-February 6, 2020 Ira Dale Joy Jr. (60) passed away after a long battle with cancer, and was reunited with his parents and younger brother. Dale grew up in Mitchell, NE, where he graduated from Mitchell High School in 1978. After graduation he served in the United States Air Force. He continued to serve as a missionary for The Church of Jesus Christ of Latter Day Saints in Spain, and continued to use the beautiful Spanish language to help others for the rest of his life. Dale married his sweetheart, Connie Marie Neal on May 5, 1983. They had four rambunctious and loving sons- David, Jason, Jeff, and Curtis, who always kept their parents on their toes. Much of Dale’s time was spent volunteering at his boy’s schools, especially in coaching the chess club. He also worked with the Ogden Association for the Blind for many years, supporting his wife, brothers-in-law, and others involved with the association. He continued to share his caring heart with others by fulfilling many callings of leadership within The Church of Jesus Christ of Latter-day Saints. Because Dale was very giving, he shared his knowledge and his love freely. Dale was a talented craftsman with an intense love of creating. He explored and investigated the interests of his sons, collecting specimens, supplies, and books. Dale loved spending time outdoors, wood working, jewelry making, leather working, reading, fishing, making award winning Dutch-oven meals, and so much more. Dale worked very hard, even while receiving cancer treatments. His dedication and work ethic was awarded with the Civilian of the Quarter by Hill Air Force Base. Dale was devoted to the Scouting program. He was actively involved with the Boy Scouts of America, and helped many scouts, including his sons and nephews, achieve the rank of Eagle Scout. His happy place was in West Yellowstone. Dale was thrilled to be able to go with his whole family to a cabin in West Yellowstone last year. Near the end of his life, a photograph of this place is what helped him through his pain, as he remembered the love and beauty that was there. There is one thing that put a smile on his face and joy in his heart until the very end… and that was being with his grandchildren. He was blessed with six beautiful grand-daughters. He gave the very best of himself to seeing them smile and know of his love. He is survived by his wife Connie, his sons, David (Leanne), Jason (Sage), Jeff, Curtis (Sarah), his grandchildren, Kadence, Shelby, Lydia, Brylee, Nikelle, and Brooke, his sisters, Eileen (Steve) Bernards and Barbara Joy. He is preceded in death by his parents Ira Dale Joy Sr. and Kathryn Heaton Joy and his younger brother Brian Joy. Funeral services will be held Monday, February 10th, 11:00 am at the Foothill Trails Ward, 1000 Suncrest Drive, Ogden, with a gathering for family and friend Sunday evening from 6:00 – 8:00 pm and Monday, one hour prior to services. Interment to follow at Ben Lomond Cemetery.

August 5, 1959-February 6, 2020 Ira Dale Joy Jr. (60) passed away after a long battle with cancer, and was reunited with his parents and younger brother. Dale grew up in Mitchell, NE, where he graduated from Mitchell High School in 1978. After... View Obituary & Service Information

The family of Ira Dale Joy Jr. created this Life Tributes page to make it easy to share your memories.