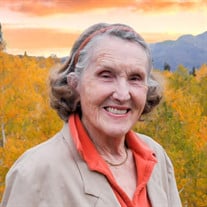 IRENE LONG REDFORD - OREM Irene Redford passed peacefully out of this life on March 4, 2016. She was born to Dorson and Olive Long on February 20, 1920 in Roosevelt, Utah, and the oldest of her 5 sisters, who were born within 6 years: Norma Packer, Eunice Cook, Miriam Labrum, Maisie Jackson, and Ardis Allred, all of whom preceded her in death. Irene spent her early years In Roosevelt and then graduated from Springville High School, class of 1938. She spent a year in San Francisco living with her grandparents, Josiah and Martha Rudy, and attended San Jose State. She moved to Los Angeles and met her husband, Lawrence Bryce Redford, in the Adams Ward, and they were sealed in the Arizona Mesa Temple in 1942. They lived in Merced, CA, and then settled in Bakersfield, CA, where she resided until after she retired from Kern County employment, thereafter moving to Orem to be close to most of her family. She was an active and devoted member of the LDS Church all of her life. She loved doing things for her family and at times provided temporary housing for many of her college-age grandchildren. They loved talking with their Grandma and eating her healthy meals. Her passions were the homemaking arts: sewing, cooking, gardening; listening to Dodger games on the radio, dancing, politics, road trips and working hard at everything she did. Irene is survived by three children: Nanci (Darryl) Thomander of Palo Alto, CA, Jim (Christine) Redford of Provo, and Jeff (Sherry) Redford of Orem; 13 grandchildren: Ali, Tauna, John, Corbin, Ben, Taylor; Kristen, Jenny, Ryan, Paige; Hannah, Spencer, Carson; and 22 great-grandchildren. She reunites with her daughter, Geraldine, who passed away at the age of 12. She was beloved by all. Funeral services will be held 12:00 noon, Saturday, March 26, 2016 at the LDS Chapel, 545 S 800 E, Orem, UT. Friends and family may call at the church prior to services from 10:30-11:30. Interment will be in the Orem City Cemetery.

IRENE LONG REDFORD - OREM Irene Redford passed peacefully out of this life on March 4, 2016. She was born to Dorson and Olive Long on February 20, 1920 in Roosevelt, Utah, and the oldest of her 5 sisters, who were born within 6 years: Norma... View Obituary & Service Information

The family of Irene Long Redford created this Life Tributes page to make it easy to share your memories.