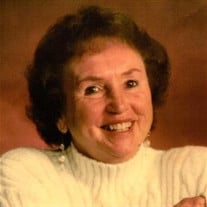 Jean Poulsen Jean was born in Ogden, Utah on January 20, 1928, and passed away on January 15, 2018. She was adopted by Irma Doxey of Ogden and John Firth of South Weber soon after her birth. As a new mother Irma was proud to give her daughter... View Obituary & Service Information

The family of Irma Jean Firth Poulsen created this Life Tributes page to make it easy to share your memories.