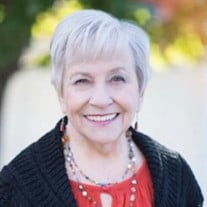 Iva Pearl Emelia Pullen Skidmore passed away October 14, 2021 at the age of 85 in her daughter’s home, surrounded by many family members. She was greeted in heaven by her loving husband John W. Skidmore, her parents Charles and Mabel Pullen, an older brother Charles whom she never met, an older sister Ida and her younger brother Larry. She was also preceded in death by a great grandson Harvey Ray Hartley. Iva left behind 5 children and their families: Denita Ellis (Larry), John Skidmore (Laura), Linda Webster (Shane), Dale Skidmore (Valerie) and Janine Hansen (Dean). Iva has 18 Grandchildren and 33 great grandchildren with 3 on the way and many nieces and nephews who adored her. Each felt that they were her favorite. Iva was born in the early morning hours during an icy blizzard, January 20, 1936, in her parents home in Lincoln Park, Michigan. It was said that the windows of the bedroom were iced over and remained that way for 10 days. As Iva grew up, she loved her family and enjoyed the camping and fishing trips they did together with extended family. She would be the first to tell you that she was a tomboy during her childhood years. Her younger brother Larry liked to brag that Iva was faster and tougher than all the boys her age. She was active in cheerleading, dancing and performing for United Service Organization (USO) shows, Veterans Hospitals, prisons and local television. She was a performer at heart and we often teased her about performing for her physical therapists after she had her stroke. Iva graduated from Lincoln Park High School, in January of 1954. She moved to Provo, Utah in March and began attending BYU. She met her husband, John, on a blind date. Six months later, on September 15, 1954 they were married for time and eternity in the Church of Jesus Christ of Latter Day Saints Salt Lake City Temple. Within 10 years they completed their family of 7. John was in the United States Air Force during the early years of their marriage. During this time, they lived in Texas, Indiana, and eventually settled in Michigan, where they bought a home. Iva, her parents, and her siblings had a very close relationship. Not a holiday or birthday went by that they did not celebrate together with a big party. Additionally, there were camping and beach trips together, and many memories were made. Any opportunity to get together for a picnic or party were seized upon almost immediately, either impromptu or planned. Each of the siblings commented many times over their lifetime that they could never remember a time when they had mean words toward one other and each had a fierce love and loyalty to the family. While in Michigan, Iva worked several years for Ford Motor Company as a secretary. In 1970 John and Iva moved their family to Arizona. As a result of their close relationship with Iva’s family, her parents and siblings soon followed them to Arizona and settled within just a few blocks of each other so the family parties, trips and outings could continue with as little interruption as possible. After moving to Arizona, Iva began working full-time as an Office Manager for Dr. W. Morgan Davis in his orthodontics office. For a few years, she worked as an Office Manager for Dr. Gordon B. Garrett in his Oral Surgery office. She finished her career working for Dr. Davis for a total of more than 25 years. Iva always served in her church callings with great love and enthusiasm. Her faith in Jesus Christ was always evident as she lived her life trying to emulate His loving example. She served as a temple worker in the Mesa, Arizona Temple and Mount Timpanogos Temple in American Fork, Utah. She also served as a Visiting Teacher and Ministering Sister, Young Women’s President, Relief Society Counselor, teacher in the Primary, Sunday School and Relief Society, Nursery Leader, and she and John taught etiquette and ballroom dancing to the 12-14 year olds in the Stake for over 20 years. Iva and John were always welcoming to others and their door was always open to anyone that needed a “temporary” place to live--which many times became long term. She was a great cook, and that may have been one of the reasons why they became long-term residents. Iva seemed to have boundless energy because she never sat down to rest. Her house was always clean and orderly and was filled with the delicious aroma of fresh, homemade food. She enjoyed feeding people and was known to feed whoever came to her home. She always felt that the way to a person’s heart was through their stomach. Iva and John moved to Lehi, Utah in 2005, where they bought a home. They lived there until Iva’s stroke in 2010, because they could no longer take care of themselves. This was a very difficult adjustment for Iva because she was caring for John, who had dementia at the time. It was very difficult for her to rely on her children for their care, as she was a caretaker of all prior to her stroke. Iva had a way of making people feel loved, accepted and important--no matter their circumstances. She genuinely loved people and they felt it. She always had a beautiful smile and sparkle in her eye, which drew people to her, and that never changed, even after her stroke. Her courage, grit and determination to keep going after her stroke have inspired all who knew her. We know her example has made a lasting impression on all that have known her. She will be missed! Funeral services will be held Wednesday, October 20th, 11:00 am at the Church of Jesus Christ of Latter-day Saints, 1020 E. 1900 N. in Lehi, Utah. A viewing will be held Tuesday evening from 6:00 - 8:00 p.m. and prior to services on Wednesday from 9:30 - 10:30 a.m., both at the church. Services may be viewed at http://mywebcast.churchofjesuschrist.org/Events/lehiutahcedarhollowstake

Iva Pearl Emelia Pullen Skidmore passed away October 14, 2021 at the age of 85 in her daughter&#8217;s home, surrounded by many family members. She was greeted in heaven by her loving husband John W. Skidmore, her parents Charles and Mabel Pullen,... View Obituary & Service Information

The family of Iva Pearl Skidmore created this Life Tributes page to make it easy to share your memories.