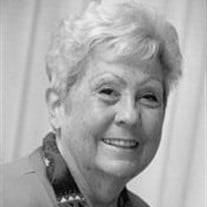 Janis LaRee Minor slipped peacefully from her mortal life in the comfort of her Orem home Friday, October 7. She’s now reunited with her husband & eternal companion Milton Minor; the couple met as students at BYU where both were entertainers in the Program Bureau. LaRee is survived by a brother and a sister, Dean & Barbara, and by sons Mikel (his wife Teresa) and Marc (his wife Brenda), as well as grandchildren Allen, Cory, Marissa, Madilyn, Mikaela, Chelsie, Alyssa, Braden, and Jaycie. Funeral services will be held Wednesday, October 12, 2011 at 11 a.m. at the Suncrest Ward Chapel at 150 North 400 West in Orem. A viewing for family & friends will be held at the same location Tuesday evening from 6-8 p.m., and again Wednesday morning 9:30 – 10:30 a.m. LaRee’s bountiful life is distinguished by devotion to family and church service, as well as generous assistance to anyone in need. Born September 5, 1934 in Provo, LaRee Allen attended B.Y. High and B.Y. Academy before enrolling at BYU where she also served in secretarial roles including assistant to the Dean of Nursing. A talented dancer, LaRee performed in BYU shows where she met husband Milt – an MC & comedian. Married in the Logan Temple, the family moved to Southern California after graduation where son Mikel was born, then to Nampa, Idaho where son Marc was born. LaRee & Milt also lived in Vancouver, WA until Milt passed in 1993. LaRee then moved to her current home in Orem. LaRee maintained an active & energetic lifestyle -- traveling, playing golf, and dancing. She was a member & officer of the Hobble Creek Women’s Golf Association. And for many years she was a member of the popular Jean’s Golden Girls dance troop – traveling nationwide and performing at high-profile venues including NBA and college sports events. She also held membership positions in the Daughters of the Utah Pioneers and was past president of Utah Sorosis – a literary society. Yet LaRee’s greatest pleasure was her unlimited devotion to family and to her faith. She served tirelessly in numerous LDS Church callings including temple worker. And she enjoyed nothing more than gathering with her family – particularly at holidays or special occasions when she would prepare and cook delicious meals & treats with remarkable culinary expertise. Though she has passed from earthly concerns of illness and discomfort, LaRee’s love & shining example will linger always to lift and inspire us all – her friends & family – until we are reunited again. LaRee is preceded in death by her father and mother, Edwin and Addie, and by her siblings Jay, Lee, and Nora Beth.

Janis LaRee Minor slipped peacefully from her mortal life in the comfort of her Orem home Friday, October 7. She&#8217;s now reunited with her husband & eternal companion Milton Minor; the couple met as students at BYU where both were entertainers... View Obituary & Service Information

The family of J. LaRee Minor created this Life Tributes page to make it easy to share your memories.

Janis LaRee Minor slipped peacefully from her mortal life in...