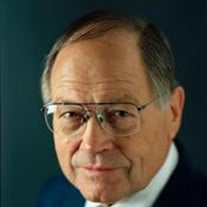 Beloved husband of Iris Slade and father of Gregerson Keith (Sophie), Claudia Brown, Bradley Howard (Carolyn), John Merrill (Stefanie), Rodney William (Marilee), Kimberly Ellison (Scott), Stefanie Slade (Mattson McFarland), Matthew McCulloch (Jonna), Heather Anne and Jeremy Adam Slade. He was preceded in death by his parents, J Claude Slade, Ruby Theora McCulloch, his brother J Dion Slade and his grandson Kevin William Slade. Keith was born in Phoenix, Arizona on January 24, 1929. He attended the University of Arizona. He served a mission to France and Belgium. He served in the Army during the Korean War in the CIC (Counter-Intelligence Corps). He attended Brigham Young University where he met and married Audrey Iris Gubler on May 30, 1958. He pursued a doctorate at Indiana University studying Proust. He taught French Literature, Civilization, etc. at BYU until he retired. He loved teaching. He went on many Travel Abroads in Europe and, on sabbatical, walked across France. He loved his precious family. He had 10 children, 24 grandchildren and five great-grandchildren. Keith loved the Lord and served in the church as Scout Leader, many years on the High Council, Sunday School Teacher, Stake Mission President, in the Bishopric and as Bishop. He served in the Temple as an Ordinance Worker. He had a wonderful sense of humor. We all feel so blessed to have had this humble, loving man in our lives. We express thanks to his family and their vigilant care day and night, and to those at the hospital and hospice. The funeral services will be held 11:00 am, Saturday, May 21, 2011 at the Bonneville 4th Ward LDS Chapel, 1289 E. 300 S. in Provo, Utah. A viewing will be held Friday at the church from 6 to 8 pm and prior to services from 9:45 to 10:45 am. Interment at the Provo City Cemetery.

The family of J Keith Slade created this Life Tributes page to make it easy to share your memories.