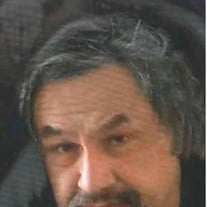 Jack McMillan, lovingly referred to as “Jackson”, was called by the Great White Spirit to his final hunting grounds on Monday evening, July 14, 2014 after a very long, courageous battle with diabetes, dialysis & heart disease. Jack was born on November 27, 1949 in Atoka, Oklahoma as a registered member of the Choctaw Nation. Jackson embraced his Native American heritage, enjoying & decorating with many Native American artifacts. True to heart, he was the original “horse trader”. He enjoyed making dream-catchers, working jigsaw puzzles, wood-working, & needle arts where he creatively designed pieces reflecting his heritage. The other loves of his life were his cats whom he considered his babies worthy of the first bite of the Thanksgiving turkey or occasional taste of his fish. He was known as choosing the rescue cats who most needed a safe home with unconditional love. He landscaped his back yard & erected a fence to create a safe haven especially for his cats; his lap and bed were home to them all. A skilled card player, he enjoyed trips to tribal casinos, and his weekly Canasta games with his closest friends. In his younger years, he was very athletic, playing semi-pro football, baseball & soccer, with full-ride scholarships to college in football and soccer. Although a formidable man in appearance & strength, he had the heart of a marshmallow. He was unmatched in loyalty as a friend, and was a true Texas Longhorn fan to the end. Hook em, Horns!!ihyju7 Jack spent over forty years in the steel fabricating industry in various management positions, winning many awards & respect from many for his knowledge & expertise in the industry. He was recruited for the top steel companies across the nation. He was preceded in death by his mother, Peggy Lee Koons of Wewoka, Oklahoma. He is survived by his wife, Mary Davidson of West Jordan, father, Keath McMillan of Lehigh, Oklahoma, brothers Kevin (Becky) McMillan of Oklahoma City, Stuart (Christa) McMillan of Tulsa, stepdad Larry Koons of Wewoka, Oklahoma, daughters Stacy McMillan-Maker (Chris) of Dallas, Texas & Jennifer Nikki Panther (Michael) of Waxahatchie, Texas, granddaughters Mackenzie Langley (the frog princess), & Maddison Panther (the duck hunter), as well as his three very spoiled furballs, Tigger, Alice, & Gino. Heartfelt appreciation goes to Harmony Hospice (RN Jamie & CNA, Larry) for their unparalleled care, compassion & concern for the family during this most stressful time. A special “Thank You” for the services of Premier Mortuary of Murray. Words cannot express our gratitude. We additionally want to thank our many friends for the meals they brought in, and their 24 hour friendship. Their kindness will never be forgotten. A celebration of life memorial will be held on Sat., Aug. 16 at Lifeline Community Church, 4431 West 8200 South (corner of Welby Park & 8200 South), West Jordan, Utah from 1-3 p.m. In lieu of flowers, the family requests donations to the Salt Lake Humane Society.

The family of Jack Lee McMillan created this Life Tributes page to make it easy to share your memories.

Jack McMillan, lovingly referred to as “Jackson”, was called...