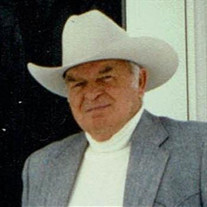 On the night of January 19th, 2020, at the age of 86, Jacky G Clawson moved on to greener pastures. Jacky, known as Jack to family and friends, was born in Farmington, New Mexico, to Lawrence Ira and Mary Hollis Clawson. He and a twin brother were the youngest of four siblings: Zora (deceased), Monty Lewis (deceased), Patricia (deceased), and Jimmy (twin). Jack spent much of his childhood in Ramah, New Mexico, surrounded by a loving grandmother, aunts, uncles, and cousins. While in his youth, Jack moved to Utah and attended American Fork High School where he played football. His enjoyment for the sport, coupled with a strong sense of patriotism, led him to join the Navy where he continued to play. He served with the Navy from 1951 to 1955, during the Korean Conflict, spending time as a deck engineer and working many hours in Navy ship engine rooms. Upon fulfilling a successful tour of duty, Jack returned home in time to watch his Alma Mater play at BYU Stadium. It was at that game he met a beautiful young woman named Linda Robinson. After dating for one year, the two were married in American Fork. He worked at Hill Air Force Base as a Metallurgist. Jack loved anything and everything to do with horses, horse racing, and rodeos. He enjoyed training horses, roping, chariot racing, and building his own chariots. His dedication and skill led him to own and train Go Jet, the High Point Cutter Chariot Racing Horse of the Year in 1981. In 1998, Jack topped off a successful career in chariot racing by becoming the World Champion Cutter and Chariot Racer on a chariot of his own creation and design. Jack is survived by his wife of 63 years Linda, his children Cindy (Doug) Simmons and Jay Dee (Sherri) Clawson, 6 grandchildren, and 22 great grandchildren. Funeral services will be held Friday, January 24, 2020, 11:30 AM at The Church of Jesus Christ of Latter-Day Saints, (4279 N. 3300 E., Liberty, UT. 84310), with a viewing and visitation to begin at 10:00 AM. . Interment to follow at the Liberty City Cemetery. Heartfelt thanks and gratitude must be extended to Quail Meadow Assisted Living and Memory Care Covey (especially Lisa, Terri, and Gigi) for their loving care, and Alex and Darbie from Brio Hospice for their kindness and compassion.

On the night of January 19th, 2020, at the age of 86, Jacky G Clawson moved on to greener pastures. Jacky, known as Jack to family and friends, was born in Farmington, New Mexico, to Lawrence Ira and Mary Hollis Clawson. He and a twin brother... View Obituary & Service Information

The family of Jacky G Clawson created this Life Tributes page to make it easy to share your memories.