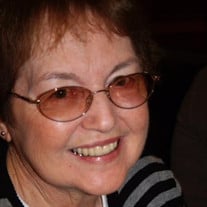 Jacqueline Louise Hadley 8/14/36 – 7/31/16 On July 31, 2016 Jacqueline Louise Hadley passed into the next life; but before she did that, she made the most out of this one. She was born on August 14, 1936 to Mary Docherty and Edward Pritchett. Her parents split early in her life but one strong memory she had of her father was when he came to visit in the midst of World War II rationing – and he came bearing a ration coupon for a pair of new shoes. No more would she have to wear her mother’s bowling shoes. She lived in Omaha, Nebraska for a time with her mother and step-father then moved to Gardena, California where she went to high school and graduated at 16. She went to El Camino College in California where she met her first husband, Herschel Edmunds and where she was also introduced to the LDS church. Soon she was a member and a wife. They had four children in five years (Shannon, Cynthia, Heather, and Leif) and Jackie became the first member of her family with a college degree, a Bachelors in Education from Long Beach State College. Then, almost as fast, after not quite a dozen years of marriage, Herschel died of hepatitis and Jackie was left with four young children to raise. Two years later she found a helpmate, George B. Hadley. They raised the kids in Thousand Oaks, California where Jackie worked as a school teacher. In education, Jackie had found her vocation and was good at it. She developed programs and mentored other teachers; but mostly, she loved just being in the classroom where she taught and influenced generations of students. Just before retirement, Jackie became a quilter so she would have an outlet for her creativity when she left teaching. She liked bright colors, bold prints and interesting designs. Even when using a pattern, her quilts were uniquely her and in the past few years she had taken to designing her own quilts. After they retired, Jackie and George moved to Mapleton, Utah to be near family, because family was really the most important thing in Jackie’s life. She loved, advised, supported, encouraged, and was there for her four children, thirteen grandchildren, and twenty-four (and counting) great grandchildren, and all of the in-laws that came with the package. They meant more to her than anything. She came from a broken situation and leaves as her legacy a strong family unit that loves each other and loves spending time together. She is a success and has earned her rest. Funeral services will be 11:00 am, Wednesday, August 3, 2016 at the Mapleton 6th Ward, 1580 North Main Street, Mapleton, UT with a viewing prior to services from 9:00 to 10:30 am. Interment in the Springville Evergreen Cemetery.

The family of Jacqueline Louise Hadley created this Life Tributes page to make it easy to share your memories.