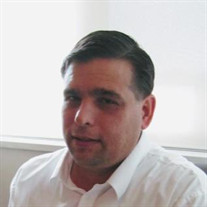 We are devastated to have lost our beloved husband, father, son, and friend; James Gerald Berg, 48. James left us far too soon on October 20th 2018. Born April 18th 1970 in Ogden, UT to Gloria Oman Berg and Gerald Ralph Berg. James lived his life as a devoted father and husband. He married Rebekah Francis on February 19, 2005 in the Timpanogos Temple, and was the father to five beautiful girls, the center of his world: Haley, Maren, Elsie, Kylah, and Annika. He worked as a welder and machinist at Utah Track and Welding. James loved the outdoors and was happy target shooting, repairing and reloading guns, reading historical and political books, and making knives, hatchets, sleds and almost anything else out of scrap material. James loved Scouting. He was an Eagle Scout and he served as Scout Master and Assistant Scout Master. James leaves a legacy of integrity and willingness to serve to all who knew him. He was always willing to help neighbors and strangers repair vehicles, garage doors, household appliances, sprinklers, water mains, and fences. If things were broken James would fix it. James is survived by his wife Rebekah, daughters: Haley, Maren, Elsie, Kylah, and Annika; his mother Gloria, father Gerald, sisters: Andrea (Mark), Rachel (Paul), Jeralyn (Brandon), and Joanna; along with numerous other family and friends. He is preceded in death by his Grandparents James and Helene Oman, and Grandparents Gertrude and Edward Berg. Funeral services Saturday, October 27th at 12:00 noon in the Eagle Mountain West State Center 1330 East Ira Hodges Scenic Parkway in Eagle Mountain. Viewing will be held prior to the funeral services from 10:30 am—11:45 am. Interment will be at Pony Express Memorial Cemetery 4647 North Eagle Mountain Blvd. Eagle Mountain.

The family of James Gerald Berg created this Life Tributes page to make it easy to share your memories.

We are devastated to have lost our beloved husband, father, son,...