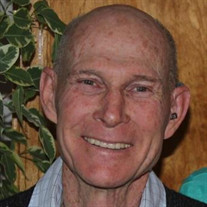 James Grover Carter “Jim” James Grover Carter, 72, passed away March 30, 2020 in Spanish Fork, Utah. Born December 29, 1947 in Bozeman, Montana, he was one of eleven children born to Mark Johnson Carter and Camille Beth Neuffer. Jim grew up on a cattle ranch and had what he considered an idyllic childhood, learning to work hard but able to go fishing or swimming in the pond or creek, hiking, riding horses, picking wild berries and climbing trees, any time he liked. He continued to love doing these things as often as opportunity permitted all his life. In high school Jim was voted homecoming king two years in a row, played football and basketball, and was student body president his senior year. He attended BYU for a year on a scholarship and then served a mission for the Church of Jesus Christ of Latter-day Saints to southern California. Upon being released he joined the National Guard, getting married to Cathy Wood in 1970 and later divorced. Kevin Reed was adopted during this union. In 1978 Jim married Kari Walker in the Idaho Falls, Idaho Temple, and she had two young children from a previous marriage, Ryan and Kresha. Jim started his own business of operating a lumber company named A&C Lumber, but 3 years later it accidentally burned to the ground. He eventually went back to school and in 1985 graduated from the University of Wyoming with a BA in Agricultural Engineering. Over the years he had jobs which included design engineer and accountant before becoming self employed doing home, commercial and insurance inspections. Kari was diagnosed in 1995 with multiple sclerosis and eventually passed away in 2013. Jim was a devoted caretaker and faithfully served her through those difficult years. Jim then developed a talent for writing poetry, as well as making things of wood, crafting several art items and pieces of furniture. Many of his creations were made from unwanted junk wood, some of which had been partially burned and turning them into works of art. The wood seemed to communicate to him its potential for beauty so he would work to clear away the decay and damaged areas to enhance what was already there. He often spoke of how all of us, as God’s children, have so much capacity for magnificence, as we access our Savior’s love and assistance to clear away the muck and damage of our own lives. Through Jim’s experiences and adversity, he developed attributes and the countenance of Christ, being kind and loving to all, and dedicated to the Gospel which he loved. Jim was an ordinance worker at the Brigham City Utah Temple for four years, during which time he met and courted Carol Coombs Watts who also served there. On March 27, 2017 they were married in that same temple for time and all eternity. They learned he had cancer the beginning of 2019, the complications eventually taking his life after three very short years together. Survived by his wife, Carol, son Kevin (Tara) Carter, daughter Kresha (Aaron) Hendricksen, son Ryan Wilkerson, step-children Jessica Watts Horsley, Jacki Watts (Matt) Italasano, Alex Watts, Logan Watts, brothers Tom (Cindy) Carter, Richard (Suzie) Carter, Bruce (Marsha) Carter, sisters Camille (David) Butler, Susan Carter, Pam (Ray) Reutzel, Karen Carter, Elizabeth (Shane) Smith, Laurel (Ross) Wilde, Holly (Greg) Compton, 20 grandchildren, 3 great-grandchildren and many nieces and nephews. Preceded in death by his former wife, Kari, her parents, Jim’s parents, Carol’s father and brother. There will be a private viewing and graveside service because of the restrictions caused by the COVID 19 pandemic. He will be interred at the Logan City Cemetery. A memorial service will be recorded and made available as soon as possible.

The family of James "Jim" Grover Carter created this Life Tributes page to make it easy to share your memories.