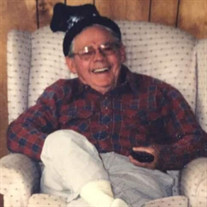 Our father, James Edward Corbett, was 94 when his soul was picked up by the Celestial Chariot. For the last three years he lived in the VA Nursing Home and was loved by the staff. We would like to thank them for their excellent and compassionate care. He probably holds the record for the most times falling without getting hurt. Dad always was athletic! A local boy, he was born and raised in Salt Lake City, and grew up in a house close to Liberty Park with his six siblings. He attended South High and was on the basketball team. He served as a CB in the Navy for three years during WWII. Upon his return home he married our mother, JoAnne McIntosh. He attended the University of Utah for a time and then began selling Life Insurance, which he did for 40 years. He was very good at it and won multiple awards and trips to conventions in different parts of the world. He enjoyed many things in life, such as jazz music, golfing, bowling, dancing, racket ball, camping, boating, swimming, and later in life just walking in water to stay fit. After separating with JoAnne, he spent a few months every winter in Mexico with his girlfriend, Ginny Peterson. However, his favorite thing was fishing! Our summer vacation spot was Island Park, ID, until the 80's when he purchased a place in Manila, UT, and Flaming Gorge became our new fishing spot. All three of dad's children fish, as well as many of his nine grandchildren and nine great grandchildren. It is likely that his four great great grandchildren will too. Dad is survived by one sister, Bonna Corbett Cottle Grody, and his children: Ed Corbett (Kathi), Claudia Corbett Deines (Karry Kilgore) and Betsy Corbett. Of all the amazing qualities he had, his most defining characteristic was his sense of humor. He always had a smile and his quick wit could always make you laugh. If you asked him how he was, the response would be an enthusiastic "Beautiful" or "Fantastic." We are going to miss you so much Jolly Jim, or Sunny Jim as his mother called him , or the name he dubbed himself, Uncle Jim. Rest in Peace.

Our father, James Edward Corbett, was 94 when his soul was picked up by the Celestial Chariot. For the last three years he lived in the VA Nursing Home and was loved by the staff. We would like to thank them for their excellent and compassionate... View Obituary & Service Information

The family of James Edward Corbett created this Life Tributes page to make it easy to share your memories.

Our father, James Edward Corbett, was 94 when his soul was picked...