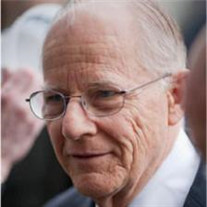 James Bridge Heath 1941 – 2019 James Bridge Heath, 77, passed away on April 18, 2019, from injuries sustained in an accident. Jim was born October 2, 1941, in Salt Lake City, Utah, to Paul and Lucille Heath and was the first of five children. He graduated from Granite High in 1959. Jim enrolled at BYU majoring in Spanish which helped start his lifelong love of the Spanish language and the Latin culture. While enrolled at BYU, Jim also joined the Air Force ROTC. In 1961, Jim, took a break from college to serve a mission for the Church of Jesus Christ of Latter-Day Saints. He was assigned to Uruguay and served from 1961 to 1964. Later in life, he was able to visit Uruguay again with his wife at the completion of his second son’s mission to Argentina. After his mission, Jim returned to BYU and changed his major to Latin American studies, graduating in 1966. Jim also completed ROTC and was one of a small number to be recognized as a Distinguished Military Graduate. He had an opportunity for a billet in Panama right after graduation and he said it took him “about a half a minute” to say yes. He was excited to be back in Latin America. Jim was on active duty in the Air Force from 1966 to 1975. During that time he served in Panama, Michigan, Nebraska, and South Dakota. He was honorably discharged from active duty in 1975. When Jim was transferred from Michigan to Nebraska in 1969, he took a brief leave to return home to Salt Lake City. Jim’s parents had been trying to arrange for him to meet a young woman in their neighborhood for some time, and it was during that leave that Jim finally met Alice Lauritzen. He said when he first saw her he heard a voice tell him, “That’s your wife.” Once Jim’s leave was over, Jim and Alice started a long-distance relationship, with only one date a month, until they were married in the Salt Lake Temple on August 24, 1970. They went on to have 8 children. After leaving active duty from the Air Force in 1975 as a captain, Jim and Alice returned to Utah and Jim went back to BYU for a new degree in accounting. During his studies he took a computer programming class that changed his career focus. He graduated in 1980 with a major in accounting and a minor in computer science and spent the rest of his life as a computer programmer. Jim was very involved in grassroots politics and encouraged his kids to be involved too. He enjoyed conducting caucus meetings as a precinct chair as well as attending meetings as a state and county delegate. Jim loved serving as a member of the Church of Jesus Christ of Latter-Day Saints and had many positions over the course of his life. His favorite positions were always those that involved serving with young children in the primary and nursery. Jim loved the idea of starting his own company. He tried several small businesses over the years. None turned out the way that he hoped, but Jim always left feeling that he had learned valuable lessons and was excited to try again when the time was right. Jim was always outgoing and social. He loved talking to people and would talk to anyone, anywhere, in Spanish or English. Jim was always optimistic about the future. He always had a dream and a plan; if one didn’t work out, he would move on to the next. Above all, Jim loved his Savior and his wife and was always proud of his children and grandchildren. Jim is survived by his wife, Alice, his eight children: Cathy, Steve (Cynthia), Becky, Mike (Marianne), Howard, Grant, Will (Anna), and Christine, 13 grandchildren, and four sisters: Marian (Larry), Susan, Sally, and Nancy. Funeral services will be held 12:00 Noon, Friday, April 26, 2019 at the chapel at 1405 North Main St, Orem, UT with a viewing preceding at the same location from 10:45 a.m. – 11:45 a.m. For those unable to attend Friday, there will also be a viewing held Thursday, April 25, 2019 from 6 p.m. – 8 p.m. at the stake center at 60 East 1600 North, Orem, UT. Interment will take place in Wasatch Lawn Memorial Park (entrance at 1770 East 3300 South, Salt Lake City, UT) at 2 p.m.

The family of James "Jim" Bridge Heath created this Life Tributes page to make it easy to share your memories.