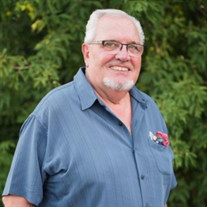 In loving memory of a Fabulous father, husband, brother, uncle and friend. On Sunday November 15, 2020 James Riley Loosemore left this earth to join his mother, father and brother who he missed dearly and as of late had been expressing that often to his 3 girls! Jim was born in Ogden, Utah on August 13, 1947 to Lester Richard and Rhoda Ann Loosemore, as well as his big brother Skip. Although he was raised in Washington Terrace, he spent many,, if not all Summers in Bondurant, Wyoming working alongside his beloved Campbell family on the ranch that his grandad and grandma homesteaded in 1913. To this day it is the only ranch in the entire Hoback Basin still owned and operated by the original homesteaders. He played football for and graduated from Bonneville High school in 1965. Football was his passion, he was recruited by Weber State College and played for the 1966 season during his freshman year. Proudly and without hesitation, Jim enlisted in the US Navy, Mid November 1966. He was stationed at Imperial Beach Naval Air Station attached to HS-10 “helicopter squadron 10” he was extensively trained until the first part of August 1967, at that time, was sent to HS-8 on the same base. This was an active search and rescue squadron, attached to the aircraft carrier USS Bennington. In November 1967 they were sent to Hawaii to pick up Apollo 4 space capsule, 100 miles off the coast. This was all part of the mission to put a man on the moon, something our dad was extremely proud of. On January 10th 1968 he deployed for Vietnam and returned December 10th 1968. Details of that year are sparse and rightfully so, but he was proud of it and never missed an opportunity to stand up and say he was a Vietnam Vet! Jim married Nancy McFarland June 25, 1967 in Ogden, Utah. He worked for Coca Cola as a delivery truck driver finishing his schooling with GI Bill to obtain his securities license. He worked for 40 years in insurance sales but quickly moved into upper management, giving him the opportunity to meet so many amazing people! Together Jim and Nancy had four spunky and feisty children : Carla Michelle Spear ( Mark) Hooper, Ut Miranda Lee Kizziar ( Jeff Galetka) Roy, Ut Angela Sue Bronson (Tyler) Plymouth, Ut and James Ryan Loosemore He was so proud of and loved his children dearly he expressed it often to us, not only through words but actions. It was not uncommon, nor that long ago for him to be out helping take care of Carla’s yard, meticulously painting walls for Mindy or making sure the oil was changed in Angie’s car. Always with a smile on his face and a wise ass remark to boot! From time to time, needs would arise for Ryan and our dad always did what was asked, he loved him fiercely! In 1980 he married Barbara Jean Wassink Burton, she brought two children with her into that union Scott Allen Burton (Linda) Salida, Co Kelli Jean Huemiller ( Tony) Seattle, Wa Our dad loved, respected and immediately bonded with them, he considered them his own. Jim and Barbara together, we’re avid football and basketball fans and we’re very active in Weber State University sports. They traveled to see them play many times and he also served as wildcat club president! When his job relocated him to Seattle, Wa. They continued that love and put it full throttle into the Seattle Seahawks, at the time of his passing we draped him with a Seahawks blanket to comfort him. They spent 30 years in Seattle never abandoning their deep love for Ogden, so after he retired from his retired job of managing the tasting room for airfield estates winery, we packed them up and brought them home! Our dad has been so happy to be back here in Ogden for these past three years, he was a lover of great restaurants and the newly redeveloped downtown Ogden really spoke to him. When it came to his grandchildren, I think it’s safe to say all 15 were enamored by him Nathan, Zachary, Kylee, Tawny, Ashley, Justin, Dawson, Molly, Michael, Trey, Lexee, Kinlee, Jayce, Jackson and finally Carter can all say they enjoyed every minute with him singing and joking at any gathering! At 70 he came out of RETIREMENT, RETIREMENT and began substitute teaching in St.Joseph Catholic High school at the urging of his most cherished nephew Chad Loosemore. The students loved him and he loved them. This guy never stopped until the very minute he took his last breath and we loved him more than life itself! Everyone did, he made you laugh, he told the best stories, he dressed impeccably, and he had countless amazing friends, too many to mention, you know if you were one of them, he made you feel like you were so important. HE WAS THE REAL DEAL! Graveside services will be held Saturday November 21, 2020 at Lindquist Memorial Gardens of the Wasatch, 1718 Combe Rd. Ogden, Ut 84403 starting at 11:00 AM. All are welcome! Coats are optional! MASKS ARE MANDATORY! SANITIZER will be available! A celebration of life will be held at a later date and his ashes will be spread at the family ranch during Branding this coming Spring! *In lieu of flowers please donate to the Wounded Warriors Project https://support.woundedwarriorproject.org/Default.aspx?tsid=11585&ovr_acv_id=12177&campaignSource=ONLINE&source=BS20047AAABRE&gclid=Cj0KCQiAhs79BRD0ARIsAC6XpaVcBdlfDD77wy_cfolWpqIrKdASaH75oZSaNwn6_rYlgVP28uH0TBgaAtzmEALw_wcB

In loving memory of a Fabulous father, husband, brother, uncle and friend. On Sunday November 15, 2020 James Riley Loosemore left this earth to join his mother, father and brother who he missed dearly and as of late had been expressing that... View Obituary & Service Information

The family of James R. Loosemore created this Life Tributes page to make it easy to share your memories.

In loving memory of a Fabulous father, husband, brother, uncle...