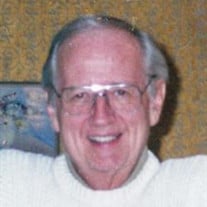 James Elvin Lowry, Jr. returned to his Heavenly Father on his 83rd birthday, March 3, 2015, surrounded by his loving family. Jim was born March 3, 1932, in Salt Lake City, Utah, to James Elvin Lowry, Sr., and Evelyn Williams Lowry. He grew up in the Sugarhouse area and had many fond childhood memories. He had a great love for animals and raised many pigeons, canaries, cats and dogs. He learned piano and was admired by many for his skill and soft touch. His love of automobiles started at a young age, and became a life long hobby. His mother claimed his first word was “ah u gah”, the antique car horn sound. He loved sports and excelled at basketball. He graduated from East High School in 1949. After graduation, he attended the University of Utah. He was called to serve an LDS mission to England, but before he could go, he was drafted into the United States Army. Before deployment to Korea, he was sealed to his sweetheart, Joyce Robinson, in the Salt Lake Temple, on March 17, 1952. They treasured their 62 year union, rarely spending time apart. He and Joyce owned many small businesses and worked together most of their marriage. He was a master at upholstery and at one time owned a seat cover upholstery business. He loved antique cars, and restored many from the bottom up. Jim loved the game of golf, and looked forward to Saturday golf rounds with his lifelong childhood friend, Lee Wagenaar. He enjoyed fishing and many fond family memories were made at the annual camping trip to Fish Lake. Jim contracted Polio when he was 24 years old. It greatly affected his health and prevented him from doing a lot of the things he enjoyed and loved. He endured the trial with a quiet resolve and rarely complained. During the last years of his life, the condition greatly diminished the quality of his life. He made the best of it, and was well taken care of by his loving wife. Jim converted to the LDS faith when he was 17 years old. He was an active member of the church and served when he was able. He asked that on the back of the program it read, “I believe in Christ.” Jim had a strong testimony of the gospel and desired the same for his children and grandchildren. Above all, Jim loved his family and treasured his time with them. He always put his family first. He was very tender hearted, and loved in a quiet, steady way. Jim is survived by his loving and caring wife, and his children: James (Vonnie) Lowry, III, Kevin (Miriam) Lowry, Mike (Elaine) Lowry, Jeff (Cheryl) Lowry, Lisa (Andy) Salisbury, and Gregg (Laura) Lowry. Twenty-one grandchildren: Brian (Sarah) Lowry, Melissa (Dave) Baese, Catherine (Ryan) Pagoaga, Aaron (Michelle) Lowry, Emily (Ryan) Spanos, T.J. Lowry, Mike Lowry, Kodii Lowry, Katie (James) Crayk, Justie Lowry, (Brian Hafen), Jesse Lowry, Jason Coble, Kellie (Quinn) Elzinga, Justin (Ashley) Salisbury, Rebecca Salisbury, Stephan (Cami) Lowry, Adrienne (Zachary) Tonge, Elder A.J. Lowry, and Amanda Lowry. Eighteen great grandchildren, one brother-in-law, Joe Cowley, his wife's siblings: Dr. John (Mary Jo) Robinson, Camille (Eph) Fankhauser, Vicki Brockbank, Bob (Kathryn) Robinson, Dave (Yvonne) Robinson, and Steve (Sue) Robinson, many nieces and nephews, and many special cousins. Preceded in death by his parents; one granddaughter, Candice Hafen; two sisters and one brother-in-law: Mary Elizabeth (Ray) Ericson and Annette Cowley, and his wife's parents, Dr. Tom and Virginia Wright Robinson. and wife's siblings: Tom Robinson, Pat Kiser, and Bev (Marion) Probert. Funeral services will be held on Saturday, March 7, 2015, at 11:00 a.m. in the Willow Creek Stake Center, 2350 East Creek Road in Sandy, Utah. A viewing will be held prior to the service beginning at 9:30 a.m. There will also be a viewing on Friday, March 6, 2015 from 6:00 to 8:00 p.m. at the Willow Creek Small Chapel, 2115 Creek Road in Sandy, Utah. Interment will be at Wasatch Lawn Memorial Park, 3401 South Highland Drive in Salt Lake City.

The family of James Elvin Lowry created this Life Tributes page to make it easy to share your memories.

James Elvin Lowry, Jr. returned to his Heavenly Father on his...