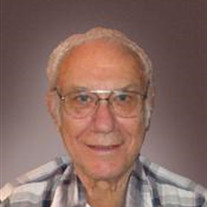 James Myron “Buddy” Raymer passed away on September 14, 2012 surrounded by family who loved him. His departure from mortality was a blessing after living for 88 full years. Buddy was born on February 27, 1924 in a log cabin in “Cob Holler” near Climax Springs, Missouri, second child and only son to Orville Raymer and Lola Newberry. From that small humble seed sprouted a mighty life that has touched thousands of others. Buddy was an appropriate name for his personality and the life he chose to live. In spite of a severe accident that left him partially paralyzed from the waist down at the age of 42, he chose to look for the best in everyone and in every situation. He lifted the spirits of all he met with his warm humor and genuine love and interest in their lives. His parents along with two sisters, Luella and Billy Ann, lived for a time in Oklahoma and Texas in the oil fields, but eventually choose to return to Missouri, where they converted to The Church of Jesus Christ of Latter-day Saints. Like many of his generation he joined the Navy as an Aviation Cadet V-5 on August 10, 1943 to support our country during WWII. As a handsome cadet in his Navy white uniform, he courted the beautiful Sybil Mae Scott and they were married on August 11, 1945. After being honorably discharged from the Navy on June 30 1947, he moved with his wife and newborn daughter, Phyllis Ann (Taylor) Raymer to Kansas City, Missouri where they lived for over 50 years. During that time they had two sons, James Myron “Jim” Raymer Jr. and Danny Leon Raymer. He was employed at Phillips Petroleum as an engineer until his accident and finished his career with them as a purchasing agent. While in the Kansas City area, Buddy became a legend to those who knew him. The only property owned by the LDS church where his family resided was the Liberty Jail, which served as the meeting house for the small Liberty Branch. His service there included Elders Quorum President, Young Men’s President, Bishop, Stake Presidency and finally Patriarch. He was especially close to the youth as a founding leader in the Boy Scout movement in that area and was awarded the Silver Beaver for his years of dedicated service. In 1999 he and Sybil moved to Payson, Utah, so they could be close to family and where he continued as an active patriarch. Buddy and Sybil left a legacy in the posterity that came from their marriage who has followed the example of their parent’s lives of service. Phyllis Ann married Sam Houston Taylor III and had 5 children: Todd Houston married to Laura Dayton; Stefani Ann married to Jeff Neeley; Scott Houston married to Nicole Coon, Heather Ann married to Burton Karns; Brittany Ann married to Joseph Adams. Jim (deceased) married Marie Louise Nordquist and had 6 children: Kara Marie married to James Allen; Rebecca Diane married to Daniel Jones; James Michael married to Karen Neilson; Anna Louise married to Jacob Fechter; Adam Lamar married to Cynthia Bussey; and Benjamin Allen. Danny Leon is married to Marilyn Ryan and have 10 children: Jeremy Leon married to Kennan Rasmussen; Jacob Aaron married to Amy Carlson; Rachel Anne married to Don Olsen; Sarah Elizabeth married to Joel Steveson; Elizabeth Anne married to Shawn Elton; Mary Elizabeth; Jessie Danielle; Julia Rose; William Samson ; and Jenny Caroline. From these have come 21 grandchildren; 47 great-grandchildren and 1 great-great-grand child expected soon. Funeral services and interment will be at Utah Veterans Cemetery & Memorial Park next to Camp Williams at 17111 South Camp Williams Road, Bluffdale, UTAH 84065 at 11:00am on Friday, September 21, 2012. A viewing will be from 10:30-11:00am on the same day in the Chapel on the cemetery park. In lieu of flowers, Dad would want you to take your family out to dinner and remember him with a good meal together.

James Myron &#8220;Buddy&#8221; Raymer passed away on September 14, 2012 surrounded by family who loved him. His departure from mortality was a blessing after living for 88 full years. Buddy was born on February 27, 1924 in a log cabin in... View Obituary & Service Information

The family of James "Buddy" Myron Raymer Sr. created this Life Tributes page to make it easy to share your memories.