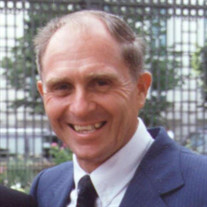 James J Peterson December 1, 1936 - June 21, 2021 James J. Peterson passed away peacefully on Monday June 21, 2021 at the William E Christoffersen Salt Lake Veteran’s Home after a 6 year battle with Alzheimer’s. There was a happy reunion in heaven with his wife, Margo, gone from him for 25 years. Jim was born to Heber Jay Peterson & Virginia Marie Berntsen on December 1, 1936 in Idaho Falls, ID. He was the oldest of three children. Jim grew up in the Sugarhouse area in Salt Lake City, UT. He served a two year mission for the Church of Jesus Christ of Latter Day Saints in Norway. He talked often of going there on a ship, packing his typewriter to type letters to home. He had the opportunity to attend the dedication of the London England Temple while on his mission and to tour around Europe after his mission. When he returned home he attended the University of Utah. Jim also served honorably in the Utah National Guard and the US Army Reserve from 1961 to 1964. He went to Fort Hood Texas for artillery training. Also during this time he met a girl named Margo Ackerlind. She was already dating someone but he wrote to her anyway while he was gone. Even after she was engaged he still pursued her. She eventually broke off her engagement. Jim and Margo were meant for each other and were sealed in the Salt Lake Temple on August 2, 1963. They both attended and graduated from the University of Utah in education. Jim was a “jack of all trades” over the years. He worked for the State of Utah and helped write the Emergency Medical Procedures for the ambulance system. He wrote a child’s book,” Broomhilda Dewdrop”, sold insurance, remodeled homes and sold them, was a realtor, and a high school substitute teacher for many years. Early on he and Margo lived on 8th Avenue in Salt Lake City and even sold flocked Christmas trees one year! Jim was a faithful member of the Church of Jesus Christ of Latter-Day Saints. He and Margo settled into the Butler West Stake in Salt Lake City. He served in many church callings from Primary teacher to Sunday School President, High Priest Group Leader, and was a veil worker at the Jordan River Temple for a few years. Jim enjoyed hunting, fishing, growing a garden and canning his harvest. He loved photographing scenery wherever he went. Loved church music. Later in life he picked up oil painting and combined his love of temples and painting to paint several Latter Day Saint temples and many other things. He enjoyed seeing this talent and love of art extend to his posterity. He loved spending time with his family at family dinners and events and enjoyed watching the grandkids. Jim is survived by his five children - Kristin (Tom) Farnsworth Salt Lake City, Michael (Heather) Peterson Herriman, Utah, David (Heidi) Peterson, Bountiful Utah, Brian (Pam) Peterson - Meridian, ID, and Karyn (Dave) Woolf - Mesa, AZ, 23 grandchildren - Krista, Elizabeth, Josh, Matthew, Jeffrey, Mackenzie, Nate, Jenna, Lauren, Karlee, Kelsie, Caleb, Allie, Dallin, Brynn, Max, Marissa, Katelynn, Cade, Ashley, Kassie, Ellie, and Whitney, four great-grandchildren, Sawyer, Tyler, Evelyn, Emily. Also his brother David Peterson, Murray, Utah and sister Jeanette Young , Georgia. Preceded in death by his wife Margo Jenny Ackerlind, parents Heber J Peterson and Virginia Marie Berntsen. Funeral services will be 1:30 pm, Saturday, June 26, 2021 at the Butler 7th Ward, 1355 East 7200 South, Cottonwood Heights, Utah where a viewing will be held Friday, June 25, 2021 from 6:00 to 8:00 pm and Saturday prior to services from 12:15 to 1:15 pm. Interment will be at Redwood Memorial Estates in West Jordan, UT. The family would like to give a special thanks to all who have cared for him the past 5 ½ years at Canyon Creek Assisted Living, Cottonwood Creek Assisted Living (now The Ridge Cottonwood) the William E Christoffersen Salt Lake Veteran’s Home/ Hall of Heroes, and Brighton/Canyon Hospice. We are so grateful for the care and love he has received over the past few years from so many people.

The family of James J Peterson created this Life Tributes page to make it easy to share your memories.