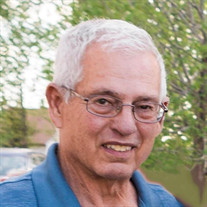 Obituary for James Bernard Schuster March 14, 1945 -April 6, 2022 James Bernard Schuster, affectionally known by friends and family as Jim, was born March 14, 1945 in Bismarck, North Dakota and passed away peacefully on April 6, 2022 due to natural causes. He moved to California when he was young and spent his childhood there. On December 23, 1966, he married his sweetheart, Jeanne RaNae Schuster. They were sealed for time and all eternity in the California Los Angeles Temple six months later. Jim had many passions in life. He served as a West Jordan police officer, built homes, and taught math for years at Kearns Junior High. He touched countless lives during his career. He taught his family the value of hard work and determination. For many years he and his family delivered hundreds of papers daily for the Deseret News. Through his example, all three of his children earned college degrees. Jim served for many years in his church callings including priesthood quorum, young men’s, and as a missionary for the church cannery. Jim was dedicated to his family and coached countless baseball games and football games. He took his family skiing every weekend in the winter. He was talented in wood-working and used that passion to bless others. He made clocks, bird houses, plaques, and shelves as gifts for loved ones. You could often find Jim with his grandchildren playing a game of checkers. Jim’s greatest joy in life was his family. He was cherished by many. James Bernard Schuster is survived by his three children Lance (Julie) Schuster, Erika (Matt Bradshaw), and Elisha (Mark) Sutton, 11 grandchildren, and 5 great-grandchildren. Funeral services will be held on Wednesday, April 13, 2022 at 11:00 am in the Crystal Heights 1st Ward. 1970 E. Stratford Ave., Salt Lake City. Visitation with friends and family one hour prior.

The family of James Bernard Schuster created this Life Tributes page to make it easy to share your memories.