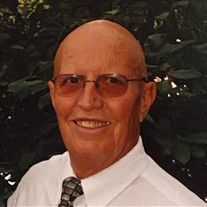 James Wright Shupe, Jr You may know him as Wright, Jim, Sonny, Dad, Grandpa, Great Grandpa or Pa. One and the same, he was born on March 28th, 1935 in Ogden Utah, to James Wright Shupe, Sr., and Myrtle Bybee Shupe. He loved living his whole life in North Ogden until he passed away in the home he worked so hard to provide on October 20, 2020, due to lung cancer. He was the third James Wright Shupe to live in North Ogden and was proud he bore the name of his pioneer great grandfather, James Wright Shupe who moved to North Ogden in 1852. There are now 5 consecutive James Wright Shupe’s; beginning with Wright’s father. Wright graduated from Weber High School in 1952. He married Alice Janneane Rose Halverson September 2, 1955 in North Ogden and they were later sealed in the Salt Lake Utah Temple of The Church of Jesus Christ of Latter-Day Saints on February 1, 1957. He attributed his “staying out of trouble” to Janneane, and was grateful for her spirituality that led him to be a better person. During his senior year in high school, he started an eight-week machinist course at Weber State College that prepared him to read blueprints and mill and machine metals. That program led to his job at Hill Air Force Base where he worked for 38 years. During his career at Hill Air Force Base, he worked hard and was promoted to run a quality control shop. When he retired, he was still running “his shop”. In 1969 he earned a Presidential Citation for a suggestion he made that saved the government millions of dollars for future production of aircraft and was awarded in Washington, DC by Vice President Agnew. He dearly loved the people he worked with in his shop and through the years considered them some of his best friends. Wright was a hard worker who held several jobs at once to provide for his family. For many years he was a custodian for The Church of Jesus Christ of Latter-Day Saints, cleaning many church buildings including the Stake Center at 900 East 2850 North in North Ogden and the Weber State Institute of Religion. He was also a custodian at North Ogden Junior High School. He served in many callings throughout his life for The Church of Jesus Christ of Latter-Day Saints, including a mission with Janneane, where they served as hosts at the Conference Center in Salt Lake City. He and Janneane took great pride in keeping their yard pristine for all to enjoy as they rounded the corner of 950 East and 3100 North. He taught his children the value of hard work while they worked together as a family at home, at the Shupe “farm” and at the Stake Center with Wright. Many practical jokes have been played on neighbors, friends and co-workers by him and his wife, Janneane. A good laugh was always welcome. Their jokes were always in good fun and they enjoyed a good joke played on them as much as one played on a friend. You didn’t have to bear the Shupe name to be welcome at family dinners. Gross Venture campground near Jackson Hole, Wyoming was their favorite place to vacation. They enjoyed the playhouses, watching people in the park, shopping, and especially watching the Bar J Wrangler Show each year. “Jackson” was the retreat destination year after year and this year their kids took them again to recall many, many years of memorable vacations with family and friends in years gone by. Wright’s standard greeting was, “Has anyone told ya that they love ya yet today? Consider it done.” and his slogan was “I am always Wright, never wrong Shupe. Not always correct but always Wright. If you ask me ‘How are you?’ I will tell you ‘I am just Wright’.” He is survived by his wife Janneane and his sister, Karen Shupe Oates. They have seven children, Janna (Bruce Kidman), J (Nancy), Dan (Dawna), Dave (Natalie), Heidi (Allen Lafferty), Cory (Melissa) and Casy (SharRee). They have over 85 grandchildren, spouses of grandchildren, and great grand-children whom they love very much. He is preceded in death by his father James Wright Shupe, Sr, his mother Myrtle Bybee Shupe, his sister Gloria Shupe Eager and two great grandsons, Stephen Davey Taylor and Kody Earnest Nielsen. The family extends their heartfelt appreciation to Wright’s friends, family and neighbors who have been by his side these past few months. Due to Covid-19, private funeral services for the family will be held. In lieu of flowers, the family asks that donations be made to the missionary fund for The Church of Jesus Christ of Latter-Day Saints. https://philanthropies.churchofjesuschrist.org/missionary or send a card to Janneane.

James Wright Shupe, Jr You may know him as Wright, Jim, Sonny, Dad, Grandpa, Great Grandpa or Pa. One and the same, he was born on March 28th, 1935 in Ogden Utah, to James Wright Shupe, Sr., and Myrtle Bybee Shupe. He loved living his whole... View Obituary & Service Information

The family of James Wright Shupe Jr created this Life Tributes page to make it easy to share your memories.