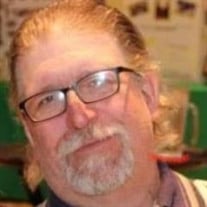 James Edward Wallace passed away August 6, 2021 at the age of 56, He died after a 6 year fight with Polycystic Kidney disease, James had been on home dialysis for 4 years, as his disease progressed. He was born August 24,1964 at Hill Air Force Base the son of Charles Lee Wallace and Ruby Jewel Robinson Wallace. He attended Crestview Elementary, Central Davis Junior High and Graduated Layton High school in 1982. He attended Davis Technical College and Weber State University where he studied computer programming. James was married to Cindy Porter on June 7,2004 in Battle Mountain, NV. They have three children Dillion Wall, Joseph Wall, Savannah Wallace Hayes (Takoda) and two grandsons Kayden Wall and Tayven Fritz. James worked for Warner Trucking before he retired where he was a long haul truck driver. He also worked for Qwik and Canteen Vending, at which he was involved in the Salt Lake 2002 Winter Olympics. He also worked as a tow truck driver and as a security guard, among other professions. James loved to fish, gun and bow hunting, camp and he absolutely loved teaching his nephews, sons, daughter and grandsons and various friends his passion. He also love to shoot ATA trap, he also got his two sons Dillion and Joseph into the National Scholastic Clay Tray ATA program, allowing them to travel and win several awards. James was a lifetime member at the Ogden Gun Club where he shoot ATA trap. He traveled the country shooting trap winning various awards in his many your of competing he also went to nationals in Vandalia Ohio. James was also involved with getting not only his two sons but his daughter, Savannah into wrestling. With all three of them excelling beyond expectations with James being right beside them. He volunteered for Girl Scouts of Utah, Lakeview service unit, for many years until he was unable to do so anymore. James was very easy-going and had a quick wit, he was cracking jokes up to the end he was surrounded by his family and friends at bedside when he passed he will be sorely missed. James is survived by his wife of twenty one years, children, grandsons, many nieces, nephews and one brother Robert (Cheryl) Wallace Daybreak Ut., He is preceded in death by his parents, two brothers Charlie (Susan) Wallace, Clearfield Ut., Larry Wallace Clearfield Ut. and one sister Denice Dianne Wallace, Clearfield Ut,. Family and friends had a birthday barbecue for James on August 15, 2021 to celebrate his 57th birthday that would have been August 24. Everyone brought a side dish to share, and their stories of James. Thank you for helping us celebrate not only his birthday but also his life. In lieu of flowers a Gofund Me account (https://gofund.me/d69a9a5a) has been set up to help pay for his final expenses and medical expenses with James having polycystic kidney disease he was unable to secure life insurance.

James Edward Wallace passed away August 6, 2021 at the age of 56, He died after a 6 year fight with Polycystic Kidney disease, James had been on home dialysis for 4 years, as his disease progressed. He was born August 24,1964 at Hill Air Force... View Obituary & Service Information

The family of James Edward Wallace created this Life Tributes page to make it easy to share your memories.