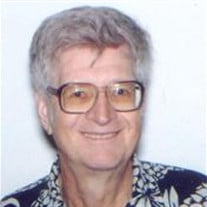 James Weber born on July 21, 1936 in Madison, WI and died on August 23, 2013. His parents Clarence Weber and Imogene McCance Weber and brother Gerald died before him. He married Anne Chestnut on June 24, 1961. He is survived by Anne who continually gave joy to his life for 52 years of marriage. He is also survived by son Nick ( Darla) of Albuquerque, NM, daughter Katherine Stickney (Dan, granddaughter Jenny) of Indianapolis, IN, daughter Susan Weber of Rollinsford, NH, and sister Joan Weber of Framingham, MA. Each of them gave him great pleasure in life. His education included a bachelor of science degree from Marquette University in 1959 and a doctorate from The Ohio State University in 1963. For 35 years he was Professor of Chemistry at the University of New Hampshire in Durham, NH. His research, aided by many graduate students, emphasized environmental chemistry of metals such as mercury. While at the University he enjoyed the company of his colleagues in Durham and of researchers from around the world. During his sabbatical leaves he enjoyed living in France, Germany, Italy, and in U.S. cities. In 1998 he retired and moved with Anne to Springville, Utah. In retirement he enjoyed reading, jazz music, fishing, tennis, and mountain hiking. He spent many hours working for political candidates in New Hampshire and Springville. For several years he was on the Board of Trustees of the Springville Library and helped pass the bond for a new library. His favorite volunteer work was with children in foster care. A Catholic service will be held on Friday, August 30, at 10:00 a.m. at St. Francis of Assisi church, 65 East 500 North, Orem, UT. Instead of flowers, the family requests donations to Catholic Community Services, 745 East 300 South, Salt Lake City, UT 84102. A reception following the burial will take place at the Springbrook Villas Clubhouse, 498 West 300 South, Springville, Utah from 12 to 3 pm.

James Weber born on July 21, 1936 in Madison, WI and died on August 23, 2013. His parents Clarence Weber and Imogene McCance Weber and brother Gerald died before him. He married Anne Chestnut on June 24, 1961. He is survived by Anne who continually... View Obituary & Service Information

The family of James "Jim" Weber created this Life Tributes page to make it easy to share your memories.