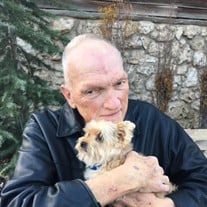 Jan Howard Nelson 1935 - 2017 Jan Howard Nelson left this life on December 27, 2017 after a brief struggle with cancer. His strong testimony that guided him his entire life gave him peace with leaving this world for the next. Jan was born in his family home in Pleasant Grove, Utah, on August 10, 1935. He was the oldest son of James Howard Nelson and Mary Leone Bennett. Jan lived his growing years in Pleasant Grove where he loved pheasant hunting and playing the saxophone with his family’s dance band. Jan served an honorable mission to Sweden from 1956 to 1958. He always retained a love for all things Swedish and carried a recipe for Kol Domar (cabbage rolls) in his wallet the rest of his life. He was the biggest foodie. He loved good cheese, fresh European pastries and believed everything could be improved with a little half ‘n’ half. He cherished his opportunity to work as a translator for the temple dedication in Stockholm and remained fluent in Swedish until the end. Jan will always be remembered for his subtle humor and one-liners for every occasion. Following his mission he met and married Janice Lyn Shields. They lived all over the world as Jan served as an officer in the Air Force, serving in security services, intelligence, and as a chaplain in the Philippines during the Vietnam War. Jan was awarded several medals and commendations as he served in the Air Force. These included the Joint Services Commendation Medal, the National Defense Service Medal, the Armed Forces Expeditionary Medal, An Air Force longevity Service Award with one oak leaf cluster, and the small arms Expert Marksmanship Ribbon. Jan and Janice lived in Texas, Florida, Germany, Maryland, the Philippines, Labrador, Iceland, Colorado and Utah. Later he worked as a teacher for the Department of Defense and lived in Japan and Germany before retiring in Pleasant Grove, Utah. Jan is survived by his wife and all nine of their children: Jaelyn (Mark Dean), Lisa, Rebecca (Todd Raine), Paul (Wendy), Sheila (Bryon Madsen), Jared (Jeanette), Jennifer (Merrill Talbot), Erik (Rachel), and Stephanie. Jan is survived by five of his siblings: Judy (Jerry Miller), Joye (Fred Holzer), Jewel (Lynn Stratford), Janis (Danny Bundy), and James (Evelyn). He is preceded in death by his parents and brother, Jerry. Jan leaves a wonderful legacy of 36 grandchildren and 10 ½ great grandchildren. Funeral Services will be held 11:00 am, Friday, January 5, 2018 at the LDS chapel at 2195 North 100 East in Pleasant Grove, Utah where a viewing will be from 9:30 am to 10:45 am. Interment will be at the Utah Veterans Memorial Cemetery with full military honors.

Jan Howard Nelson 1935 - 2017 Jan Howard Nelson left this life on December 27, 2017 after a brief struggle with cancer. His strong testimony that guided him his entire life gave him peace with leaving this world for the next. Jan was born... View Obituary & Service Information

The family of Jan Howard Nelson created this Life Tributes page to make it easy to share your memories.