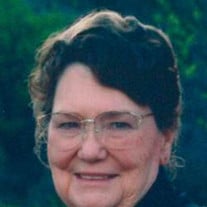 Our loving mother, wife, and grandmother, Janamay Krass, 79, returned to her Heavenly Father on June 16, 2015. She was welcomed by her mother, father, and son (Karl). Janamay passed peacefully, surrounded by her close family members after a 3 year battle with MDS. Janamay was born April 4, 1936, to Clark & Evelyn Alcorn in Harlem, Montana. She married her sweetheart, Paul Lester Krass, on May 11, 1957, and was later sealed in the Idaho Falls LDS Temple. Janamay and Paul have 3 children, Paul L. Krass Jr., Crystal M. Chadwick, and Karl L. Krass, 8 grandchildren, and 15 great grandchildren,whom she loved and adored dearly. Janamay was very friendly and personable, which transferred to her professional career as the switchboard director for the Columbus Great Falls Montana Hospital and later on at the Sundance Resort, where she had the opportunity to help and get to know Robert Redford. Janamay was a member of the Church of Jesus Christ of Latter-day Saints and faithfully served in many callings throughout her life. Janamay poured her heart into everything she was involved in. She was an extremely skilled tailor, had a very sharp mind, and was well educated. She was also a very talented 4H Leader and helped many reach their aspirations through the program. She was very skill oriented and wanted to pass her skill set on to anyone who was interested. Janamay loved socializing and spending time with her family, she enjoyed reading, and had a special place in her heart for her dogs, especially Tramp and Yorkie. She is survived by her husband of 58 years, Paul Krass, son Paul (J’lene) Krass Jr., daughter Crystal (Clayton) Chadwick, and brothers and sisters Cleon (Jay) Curtis, David Alcorn, Newel Alcorn, and LaNae (Jay) Glenn. All of whom brought her great joy. Funeral services were held 12:30 p.m., Friday, June 19, 2015 at the LDS chapel at 50 South 800 East in Orem, UT. Viewing will be held 11:15 to 12:15 prior to the services. Interment at the Utah Veterans Memorial Park.

Our loving mother, wife, and grandmother, Janamay Krass, 79, returned to her Heavenly Father on June 16, 2015. She was welcomed by her mother, father, and son (Karl). Janamay passed peacefully, surrounded by her close family members after a... View Obituary & Service Information

The family of Janamay Alcorn Krass created this Life Tributes page to make it easy to share your memories.