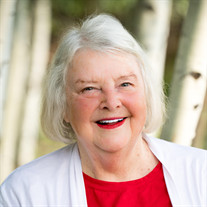 Jane Ruth Kitchen Lee, age 83, returned to her heavenly home on January 2, 2021. Jane was born August 7, 1937 in Salt Lake City, Utah to George Wilford and Joyce Anderson Kitchen. She married Robert Charles Lee on June 19, 1957 in the Salt Lake Temple. Jane was loved by all who knew her and will be dearly missed by her family and many friends. Jane is survived by her three children Tammy (Taylor) Neilson, Doug (Tanya) Lee, Linda (Brian) Coutts, 22 grandchildren (including spouses), 14 great-grandchildren, her sister-in-law, Virginia (Terry) Andersen and many nieces and nephews. Jane is preceded in death by her infant granddaughter, Bridget McArthur, mother Joyce, father George, brother Earl and sister-in-law, Pat. Her oldest brother Glen William Kitchen was declared missing in action on January 7, 1944 after the plane he was piloting did not return from its wartime mission in WWII. Though Glen’s body was never recovered, he was presumed dead in January 1946. Jane will be laid to rest 77 years and 1 day after Glen was declared MIA. While her passing brings immeasurable grief to her family here on earth, our hearts are full as we imagine the joy felt by a fully reunited Kitchen family! Jane was a welcome but unexpected third child to the Kitchen family. Her brother, Glen, was 16 when Jane was born; Richard Earl was 6. Because Jane’s mother Joyce had serious health issues, doctors did not expect her to survive a third pregnancy and advised her to terminate. Joyce declined explaining that her own mother had just passed away, and she believed that this was God’s way of giving her a “life for a life.” Joyce did survive to raise Jane, and passed away suddenly 31 years later, just before Jane’s daughter, Linda was born; another “life for a life.” Gaining an education was highly valued in Jane’s family. Jane excelled in school, graduating from East High School in 1955. She received her bachelor’s degree in Elementary Education from the University of Utah in 1958, graduating with honors in just three years. Hundreds of parents, students, teachers and administrators remember Jane as ‘Mrs. Lee’ from her 45 years of teaching, mostly in 6th grade. Jane’s favorite subjects to teach were social studies and language arts, as she had a wealth of knowledge and experience in those subjects. Mrs. Lee had a unique gift for teaching with warmth and enthusiasm; she possessed a natural sense for knowing how to reach students. Many remember her with love and admiration. Long before anyone could ask Siri, Alexa or Google, some of us were fortunate to be able to ask Mom, Grandma, Jane or Mrs. Lee. She seemed to know the answer to just about any question and could often explain in detail the historical implications, social context and relay interesting stories related to any information sought. Jane’s love for learning extended into her personal life as well. She loved to read, travel, visit museums and attend plays and musicals. She found joy in learning new things in every way she could. While teaching was the profession Jane enjoyed for more than half her life, her deepest devotion was to family. She attended hundreds of ball games, recitals, plays, musicals and performances of her children and grandchildren. We all counted on her loyal and consistent support. Grandchildren remember fondly the individual “special times” she scheduled with them on a regular basis. Secretly, each child, grandchild and great-grandchild believes that they are her very favorite person in the world. Her capacity for love and compassion was extraordinary. Each family member grew up knowing what it felt like to be truly loved and were tutored by her example of generosity and compassion. She leaves within each of us her legacy of love which we will work to carry on as she so beautifully exemplified. A daughter, sister, wife, mother, grandmother, teacher and friend will be sorely missed by all who had the privilege to know Jane Lee in this life. She is now welcomed home with open arms by joyous loved ones who have gone before and long anticipated her homecoming. Funeral services will be held Friday, January 8 at 11:00 a.m. with a family viewing shortly prior to the service. Regrettably, because of the ongoing pandemic, in-person attendance will be limited to close family and by invitation only. The meeting will be available for live streaming at the following link: http://mywebcast.churchofjesuschrist.org/ with a meeting code 37650. The funeral will also be professionally recorded by a videographer and made available for watching at any time. Information regarding access to the funeral video will be updated at www.premierfuneral.com and on family social media platforms.

The family of Jane Ruth Kitchen Lee created this Life Tributes page to make it easy to share your memories.