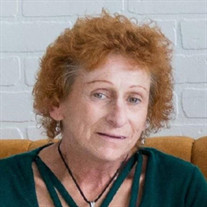 Janeil Spendlove Tebbs, 61, died peacefully at her daughter’s home in Layton, Utah, on Friday March 13, 2020. Janeil is the daughter of Wayne and Deyon (Eakins) Spendlove of Morgan, Utah. She was born December 21, 1958 in Ogden, Weber, Utah. She graduated valedictorian from Morgan High School in 1977. Janeil married David Stanley Tebbs, August 12, 1983 and they had two beautiful daughters, Ashley Ray Tebbs of Roy, Utah, and Kelsey Dee Tebbs (Zackery VanWormer) of Layton, Utah; her and David later divorced. She leaves behind her two daughters along with her four grandchildren: Evie Nicole McGlamery, Braiden David Nestico, Ava Ashlyn VanWormer, and Hazel Lee VanWormer. Janeil loved to read and work in her garden, she adored her cat Lucy and talked about her often. She believed in the power of healing through massage, touch and transferred energies. Her sense of humor and love for her close friends was one of a kind and she will be missed dearly. Janeil is also survived by her parents and seven sisters and brothers: Shanna (Theron) Schaefermeyer, Washington, Utah; Denzil (Susan) Spendlove, Henefer, Utah; Dawain (Jana) Spendlove, Clinton, Utah; Linda Butcher, Clinton, Utah; Rodney Spendlove, Morgan, Utah; Diane Berman, Redmond, Oregon; and Lisa (Christian) Griffith, Silverdale, Washington. She is preceded in death by her grandparents and her aunt, Freida Sinkinger. The family would like to give special thanks to Ashley and Blake for their care for Janeil during her struggle battling cancer; to Lori Sickinger for her determination in keeping Janeil in good spirits; to Kelsey and Zack for their care during her final months; and a heartfelt thank you to her nurses Elyse, Kylee, Tara and Aspen from Summit Hospice. Janeil has chosen to be cremated and her remains buried alongside her family in Henefer, Utah. Services have yet to be determined.

Janeil Spendlove Tebbs, 61, died peacefully at her daughter&#8217;s home in Layton, Utah, on Friday March 13, 2020. Janeil is the daughter of Wayne and Deyon (Eakins) Spendlove of Morgan, Utah. She was born December 21, 1958 in Ogden, Weber,... View Obituary & Service Information

The family of Janeil Spendlove Tebbs created this Life Tributes page to make it easy to share your memories.