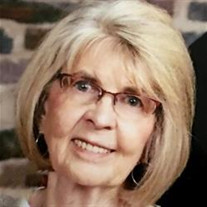 Janet Poppleton DeMond, 77, passed away surrounded by family on September 22, 2018 at her home in Pleasant View, Utah. She was born May 17, 1941 in Logan, Utah to Don E. and Virginia Poppleton. Janet was the oldest of five children, Kathryn Fuhriman, Brent Poppleton (deceased), David Poppleton, and Susan Davis. As a child, Janet lived in Ogden and Salt Lake City, but spent the majority of her youth and teenage years in Wellsville Utah, growing up on the family farm where she developed a passion for horses. The family returned to Ogden during her senior year of high school and she graduated from Ben Lomond High in 1959. She then attended Utah State University where she met her future husband Jerry DeMond and subsequently married in the LDS Logan Temple on August 11, 1961. Upon her husband’s graduation from USU, the couple moved to Southern California where Jerry taught high school and they started their family with a son, David. A few years later, they returned to Utah and purchased a home in Pleasant View, Utah, shortly before the birth of their daughter, Stacy. A son Bryan was born four years later, followed two years later by their last son, Bradley. Janet was an avid reader and loved literature, art and history. As her children got older, she decided to return to school and completed her Bachelors of Arts in English with a minor in history at Weber State University on June 7, 1996. Throughout her life, Janet has been a devout member of the Church of Jesus Christ of Latter-day Saints, holding numerous positions in the Young Women’s, Sunday School and Relief Society organizations. Her great passion was genealogy and she and Jerry taught family history for many years. She not only spent a great deal of her time researching and recording her family’s history, but visiting the many places throughout the world from whence they came. Over the years she helped to produce numerous family biographies and helped to publish the journals of her parent’s groundbreaking LDS missions to the Xhosa Tribe of South Africa during the apartheid era of the 1980s. Janet loved to travel and experience different places around the world. When her husband Jerry finally retired, the two of them participated in a BYU Teaching Abroad Program where they taught English to university students in Guangzhou, China, northwest of Hong Kong on the Pearl River. To the end, Janet was a fighter, spending the last seven years of her life fighting cancer. With her passing, Janet leaves behind many fond memories and a proud legacy for her four children and eight grandchildren: David - Washington, DC, Stacy (Ron) Nielson and their children Zachary (20), Audrey (18), Carter (12), - Salt Lake City; Bryan (Courtney) and their daughter Brynlie (4) - Salt Lake City; Brad (Kacey) and their children Ellie (13), Joshua (11), Sophie (8), and Luke (5) - Morgan, Ut. Viewings will be held Thursday September 27 from 6-8PM and Friday September 28 from 9-10:30 AM at the LDS Pleasant View 12th Ward building on 900 West and Pleasant View Drive. Memorial services will be held Friday from 11 AM to 12:00 PM at the same location. Interment will be at the Wellsville City Cemetery in Cache Valley.

Janet Poppleton DeMond, 77, passed away surrounded by family on September 22, 2018 at her home in Pleasant View, Utah. She was born May 17, 1941 in Logan, Utah to Don E. and Virginia Poppleton. Janet was the oldest of five children, Kathryn... View Obituary & Service Information

The family of Janet Poppleton DeMond created this Life Tributes page to make it easy to share your memories.