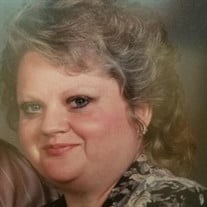 Janet was born on Feb 16,1959 in Sandpoint, ID. Janet’s home burned down when she was a toddler, and later, she and her family moved to Bountiful, Utah, where she made several neighborhood friends, and attended Jr High. After the adoption of her youngest sibling, in 1972, Janet and her family moved to Mesa, AZ. Janet attended Kino Jr High and graduated from Westwood High School. Janet held positions in her church, which she dearly loved: Sunday School teacher, and Church Librarian, and was very active in Young Adults. Since Janet so enjoyed styling hair (much to her sister’s dismay), she went to beauty school to become a cosmetologist. In 1986, Janet decided to go to BYU to earn a degree, and to experience more of what life had to offer. After college, Janet worked hard, earning the trust of her employers, then began managing the solons where she cut and styled hair for the scores of clients who loved her. Janet was a stubborn, yet fun loving, smart-aleck kind of woman, who loved fresh flowers and helping others. Janet loved children, and working with them. She became a caregiver to wonderful families who lived in the Mesa/Gilbert AZ area. Janet became more than a baby-sitter, she became a part of each family, and a heroine to the children – all of whom she cherished. Janet married in May of 1990, in the Mesa, AZ temple to Gilbert Oliver. Within 9 months, Janet and Gil had fostered several children, adopted 5 children, and later, one more. Janet loved her children, and always did what she thought was best for each one, individually. Over the years, Janet again held positions in the church, one of them including Young Women’s President over The Weber West Special Needs Mutual in Roy, Utah, where she raised her family. In October, 2020, Janet’s son, Skylar, died in Washington, at the Army base, where he was stationed. Janet’s heart never fully healed from the pain of the death one of her children. Five months later, Janet joined Skylar in Heaven, along with her parents, DeRoy and Christie Higley, her nearly-adopted-brother, Bradley Jason Scott, her cherished brother- in-law, Tom Rainwater, her grandparents and aunt and uncles and several cousins. Janet leaves behind her husband, Gilbert Oliver; Daughters: Lacie and Janessa (Kimberly); Sons: Matthew, Jensen and McKay (Noah); several grandchildren; Brothers: Bruce and Lavelle; Sisters: Kathy, Calista Jill, Connie Rainwater and Judy Mailboy George; Numerous aunts and uncles, cousins and nieces and nephews. Services for Janet: Please note the time, as we felt it is important we stay true to Janet’s personality: Thursday, April 8, 2021 9:38am Viewing 10:41am Services Viewing and services will be held at Janet’s home ward building- “The Parks’ Building”: The Church of Jesus Christ of Latter Day Saints 5930 S 2200 W Roy, UT 84067 To view the services on-line please joins at http://mywebcast.churchofjesuschrist.org/royutahstake then select "Janet Oliver Funeral." Lunch is to be determined, as weather and CDC’s pandemic restrictions may be a factor. Updates for Luncheon will be given on Janet’s social media.

Janet was born on Feb 16,1959 in Sandpoint, ID. Janet&#8217;s home burned down when she was a toddler, and later, she and her family moved to Bountiful, Utah, where she made several neighborhood friends, and attended Jr High. After the adoption... View Obituary & Service Information

The family of Janet Terri Higley Oliver created this Life Tributes page to make it easy to share your memories.