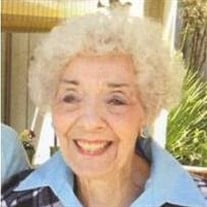 Janice Pett Hart-Nielsen 1931 - 2016 Janice Pett Hart died peacefully at her home on September 12, 2016 with her family by her side. She was the second of two twin girls born on August 13, 1931 in Salt Lake City, Utah, to Sarah Genevra Brown and Frank Russell Pett. Janice and her twin sister Joan had a wonderful relationship. Although separated by miles, they remained very close and spoke to each other weekly for most of her life until Alzheimer’s overtook her. Janice overcame many obstacles in her life; at the age of 8 she was diagnosed with polio and was bedridden for a year. During that year, her father spent every evening rubbing and massaging her impacted leg hoping to lessen the impact of the disease. While the impacts of polio were not visible to the eye, it did stunt her growth at 5’ 2”, and she lived and suffered in silence with pain in her right knee for the rest of her life. This quiet persistence to move forward while suffering was the defining aspect of her life. In 1959, her loving father passed away, in 1961 her mother passed as well. Two years later her grandmother passed and then her husband, Dwight Harris Hart died of bone marrow cancer at Christmastime in 1963, leaving her to raise two children by herself. In spite of suffering through the deaths of so many loved ones in such a short period of time, she went to work raising her two young children alone; David Harris Hart and Stephanie Hart. Janice decided that she was going to make sure that her children were given every opportunity to experience all that life offered in Utah. She pushed herself to do things that she had little or no experience with. She designed and built a second home in Park City; bought a boat (even though she did not know how to swim and was afraid of the water!); and learned to ski, to hike, and to fish. Stephanie loved to ride horses, and Janice saw to it that Stephanie’s dream to own a horse was fulfilled. She accomplished all this without having a college education. She knew how to work hard and was very determined! In 1979 she met and married Harold Nielsen. This began a new phase of her life where she and Harold enjoyed traveling, visiting national monuments, and attending air shows. Over the years that followed, Janice and Harold also enjoyed being grandparents to their 6 grandchildren. Sadness hit again in 2003, when Harold passed away after a long battle with cancer and diabetes, and, Stephanie, her daughter, died that same year of cervical cancer. During Stephanie’s illness, Janice not only did had to care for her sick daughter, but was also responsible for feeding and caring for Stephanie’s children, returning home late after midnight. She served with diligence and love, with no thought of herself and she will be forever honored by her posterity! Janice has now joined her family on the other side and is rejoicing with her beloved daughter, her spouses, her mother and father as well as her honored grandparents. She leaves behind a son, David Harris Hart, FAIA, his wife, Michele M. Hart, six grandchildren; Chelsey Hart (Kevin Christensen), Valerie Hart (Tyler Nelson), Brittany Hart, (Donald DeYoung) and Jessica W. Hart, (Aaron Wilbee), Sarah Hart (Philip Rice), William Hart (Jamie Bredsguard), and 10 great grandchildren. The family would like to thank Michele Hart, Cindy Sedgwick, as well as William and Jamie Hart, for the loving care that they provided to Janice over the last 10 years as she struggled with Alzheimer’s. The family will celebrate Janice’s life at a small graveside service at the Salt Lake City Cemetery on Saturday the 24th, 2016.

Janice Pett Hart-Nielsen 1931 - 2016 Janice Pett Hart died peacefully at her home on September 12, 2016 with her family by her side. She was the second of two twin girls born on August 13, 1931 in Salt Lake City, Utah, to Sarah Genevra Brown... View Obituary & Service Information

The family of Janice Pett Hart-Nielsen created this Life Tributes page to make it easy to share your memories.