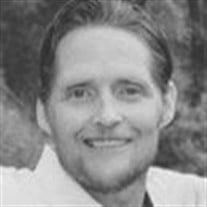 "Great battles make great heroes" Our hero Jason Dee Reynolds, 48, passed away Friday, July 12, 2019, in South Jordan, Utah, due to complications from a medical procedure in 2005. Jay was born on December 30, 1970 to Dee and Janet Reynolds in Salt Lake City, Utah, two minutes after his sister, Lisa, his first friend and best friend. Jay's greatest loves were his wife Steph, his boys Josh and Jer, family, his two dogs, sunsets, sports, movies, golf, a rainy day, making people laugh, and a fountain Coke. Jay attended Brighton High School (class of '89) where he made life-long friends and played on the golf team, being named team captain and 'golfer of the year'. He was an exceptional golfer with many awards and accomplishments, including playing in the Junior World Golf Tournament and the Future Masters alongside Tiger Woods. Jay attended Southern Utah University on a golf scholarship where he was also named 'player of the year'. He graduated with a B.S. in Psychology in 1994. After college he became a golf professional, working as an assistant pro and instructor at Cedar Ridge, Mick Riley, and Old Mill golf courses. Jay especially loved running the Junior Golf clinics and working with kids, as well as the Ladies League. Old Mill is where he met the love of his life and eternal companion, Stephanie, whom he married in 2001 in the Bountiful Temple. Steph has always given every bit of love and devotion to Jay and truly sacrificed her life for him. He was her world and she was his. The love Jay had for Steph was unlike any other. He truly adored her. Many days were spent snuggled up on the couch watching movies, talking, laughing, and Steph being entertained by his endless stories. They were best friends and loved spending every minute together. Josh and Jeremy were what he considered his greatest accomplishment, joy in his life, and legacy in this world. He was so proud of them and the men they have become. He leaves them his sense of humor, ability to connect with people, opportunity to inspire others, optimistic outlook, love of family and commitment, and a strong testimony and faith in Jesus Christ. His favorite memories with his boys were trips to Boston and Philly, collecting sports memorabilia, opening trading cards, and watching them play sports. His mom was his angel on earth and the most selfless person he had ever known. She taught him the importance of service and a positive attitude. His favorite times with his dad usually involved sports; Golden Eagle hockey games, Dodger games, and golfing. His dad taught him the value of hard work and unconditional love. Jay had a unique and special relationship with each of his four siblings. He was a best friend, nickname giver, comedian, sometimes mischievous, and always more concerned for them than himself. It was always the five of us and a piece will forever be missing. Jason was a member of the Church of Jesus Christ of Latter-day Saints and was especially grateful for the love, support, and sense of community from each ward he attended. Jay loved animals, especially his two dogs, Junior and Jessie. He loved kids and had a special connection with them. He is adored by his endless nieces and nephews who simply loved their Uncle Jay. It would be impossible to list all of Jay's many gifts, but he is probably best known for his glass half-full outlook on life, even in the toughest of times simply stating when asked, 'Life is Good'. His magnetic and engaging personality drew people to him and they never want to leave. When you were around Jay, you could expect to laugh a lot. He had a quick wit and unique sense of humor. He touched the lives of everyone he came in contact with and even the lives of people he never met. He is survived by his amazing wife Stephanie Hartvigsen Reynolds and two incredible boys, Josh (McCall) and Jeremy; parents Dee and Janet Reynolds; siblings Lisa O'Neil (Scott); Kim Francis (Steve); Ashley Whiting (Teag); Jake Reynolds (Emily), dog Jessie, and many adoring nieces and nephews. He was preceded in death by grandparents John and Shirley Reynolds; Albert and Dorothy Holt; and his dog Junior. Family members and friends have supported and prayed for Jay and Steph throughout the years and their love will be appreciated and felt forever. We are grateful for the endless Doctors and Nurses who put their heart and soul into caring for Jason through his difficult medical journey. They not only provided care, but also love, friendship and support and many became like family to him. In lieu of flowers, Jay requested that donations be made to the Best Friends Animal Society in Kanab, Utah. Services to celebrate Jay's life will be held Saturday, July 20th at 11:00 a.m. at the Brighton Stake Center, 2895 Creek Road, Sandy, Utah. Viewings will be held at the same location Friday, July 19th from 6:00-8:00 p.m. and beginning at 9:30 a.m. prior to services. Jay's love for Steph is summed up best in his own words: "Steph is everything to me. She is my best friend, my rock, my iron rod, my one true love. I never knew the love she and I have for each other was even possible. No one could ever love the way Steph does. She is the person God intended for me to be with. I love you Steph, my eternal companion."

"Great battles make great heroes" Our hero Jason Dee Reynolds, 48, passed away Friday, July 12, 2019, in South Jordan, Utah, due to complications from a medical procedure in 2005. Jay was born on December 30, 1970 to Dee and Janet Reynolds... View Obituary & Service Information

The family of Jason Dee Reynolds created this Life Tributes page to make it easy to share your memories.