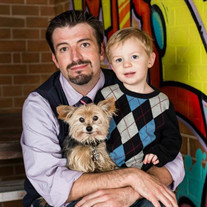 Jason Allen Wright (1979–2018) Jason Allen Wright was born on January 5, 1979, to Charlie and Nancy Wright, in El Paso, Texas. He passed away unexpectedly on April 20, 2018, in Salt Lake City, Utah. Jason was the youngest of five siblings who often called him “Meatball” due to his stout frame, his square haircut, and his habit of sucking on pieces of meat. Jason graduated early from Granite High School in 1996 and attended Dixie College in St. George, Utah. A devout fan of the Miami Dolphins, Utah Jazz, and BYU football, Jason loved sports. He adored his son Cooper and his dog Douglas, a Yorkie. He was a kind, empathetic, personable man who shared all he had. Despite years of addiction, Jason was determined to make something great of his life. Jason leaves behind his father and mother, Charlie and Nancy Wright; his son, Charles Cooper Wright; and siblings Kathy (Bill) Mocharnuk, Mike (Connie Ruckstuhl), and Steve Ruckstuhl. He is preceded in death by his brother Mark Ruckstuhl. Funeral services will be held at the LDS Jefferson Ward building, 1883 South West Temple, on Saturday, April 28 at 11:00 am. A viewing will precede the service at 10:00 am. Interment will take place at the Salt Lake City Cemetery.

The family of Jason Allen Wright created this Life Tributes page to make it easy to share your memories.