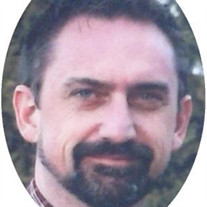 Some people win renown by building great empires with stone castles or by influencing the hearts of nations. Jay Richard Davis may not have built an empire or influenced nations, but he built his own little kingdom with his family and touched the hearts of all who knew him. Jay was born October 2, 1968, in Tremonton UT, to his mother Gayla Howell Davis and his father the late Richard B Davis. From his youth Jay enjoyed building LEGOs, constructing elaborate sandcastles, drafting plans for grand palaces, and watching Star Trek. His siblings Jennifer Lewis, Bonnie Christiansen, Mark Davis, Mary Haws, and Carol Christensen remember him as “the best big brother in the world”. He was the knight in shining armor and the most willing playmate. Jay was adored by his uncles, aunts, and grandparents. Jay served an honorable mission in Campinas Brazil for The Church of Jesus Christ of Latter-day Saints. Upon his return, Jay earned a Masters of Accounting from Utah State University. It was there that his fairytale began. He fell eternally in love with the fair princess Kimberly Ann Gleason and made her the queen of his kingdom. They were sealed in the Salt City Utah Temple on December 28, 1994. Together they had eight children: Jayson Ben Richard, Kimberly Anne (“Annie”), Sadie Elizabeth, Christopher Jay, Marilyn Marie, Esther Isabella, Grace Victoria, and Dovie Jayne Alexandra. Each one a jewel in his crown and his greatest pride and joy. The foundation of Jay’s kingdom rested on his devotion to God and commitment to his dear wife and precious children. Jay served in many callings including stake missionary, Primary, scouts, and as a valiant ministering brother. Jay was passionate about family history and temple work. Following a prompting from God, Jay gave up his dream of going to California to become an architect and stayed in Utah to take a job at UHEAA. Jay worked there for over twenty years which allowed him to raise a large family in his Layton castle home. He loved spending time with his adorable wife and children as well as extended family. Whether it was at a campout, a day kayaking, or eating pizza together, Jay reveled in being with the people he loved. As in all good stories the hero must face the foe. In his last years Jay fought tumors, cancer, and covid. The battle to brain cancer and covid was lost on Thursday, October 14, 2021, in the University of Utah Hospital with his beloved queen by his side. Jay returned to the realm of his Father but his kingdom will continue to grow. This chapter may have ended, however, through Jesus Christ, Jay’s “happily ever after” is just beginning. Jay Richard Davis, may your kingdom “live long and prosper”. Viewing: Friday, October 22, 6:00 pm - 8:00 pm and Saturday, October 23, 9:30 -10:45 am Funeral: Saturday, October 23, 11:00 am All services will be at The Church of Jesus Christ of Latter-Day Saints, Layton Hills Ward 3290 North 1050 East Layton, Utah 84040 The funeral service will be on Zoom: http://mywebcast.churchofjesuschrist.org/laytonutahlaytonhillsstake

Some people win renown by building great empires with stone castles or by influencing the hearts of nations. Jay Richard Davis may not have built an empire or influenced nations, but he built his own little kingdom with his family and touched... View Obituary & Service Information

The family of Jay Richard Davis created this Life Tributes page to make it easy to share your memories.