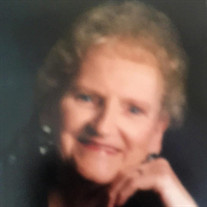 Jean Ann (Burns) Zoani, loving wife and mother, passed away on March 13, 2020 at the age of 91. She is survived by her children; Jeri Zoani; Bob(Robert) Zoani; Jack Zoani and spouse Janet Stice; Terri(Theresa) Zoani; Jim (James)Zoani and spouse Sreyvong Zoani; Alf (Alfred)Zoani. She is also survived by 4 grandchildren; Casey, Jason, Eric and Robert, and 2 great grandchildren; McKenzie and Bentley. She was "Aunty" to many nieces and nephews and she cherished each of them. Many $2 bills were given by Aunty for birthdays and visits. She was preceded in death by her father, Thomas and mother, Bridget. Also preceded in death by her siblings; Clarence, Raymond, Helen, Vincent, and Marie. She was also preceded in death by Earl Louis Zoani, her husband of 34 years. Jean was born on August 7, 1928 to Thomas and Bridget Burns in Butte Montana. Her early life in Butte, as recounted by her, was filled with memories of family, very cold weather, and very warm hearts. She was raised during the depression and although not having much, her fondest memories were of family and neighbors pulling together to care for each other and help those in need. She married Earl Zoani on New Year’s Eve, 1953, and they had 6 children while living a nomadic military life. She spent time in Wyoming, California, Italy(twice), South Carolina, and Virginia. During this time she was active in military life and raising her children. Their New Year's Eve parties were EPIC. After Earl's retirement and move to Utah in 1971, she spent much of her time as a homemaker and raising her children. She also spent time working alongside Earl in running a few small businesses, making a difference in the lives of hungry people, and being genuinely kind and good. They did not have much, but their house was open to all and many times the dining table was filled with more than just immediate family. After Earl passed in 1988, she lived with her daughter Jeri for a number of years, then across the street from her daughter Terri in Sandy, Utah. She stayed involved and continued to care about the needs and welfare of her family and friends. In 2002 she moved into City Plaza Senior Apartments where she flourished. She made many friends and was active and social, exercising, playing cards and games, and enjoying the company of people her age. She won so many Halloween costume contests they made a rule that she could not win anymore(Thanks Jeri!!) She lived there for 15 years until the start of dementia forced a move to receive the care she needed. The last 18 months of her life Jean battled dementia and lived at WillowWood Care Center. She still smiled often and liked to recount memories of her early life in Butte. The family would like to thank and praise the staff at WillowWood who provided her with care, love and a sense of community. Their patience and understanding is second to none and helped Jean live as full a life as possible right up to the very end. Thanks and appreciation to Bristol Hospice, who comforted her in her final months. Jean’s family would also like to thank all of those who made such an impact in Jean’s life. You are too numerous to mention and you know who you are. Please know you are in our thoughts and prayers and Jean’s life would have been so much poorer without you in it. There will be a viewing and visitation on Wednesday, March 18, 2020 at Premier Funeral Services, 67 East 8000 South, Midvale Utah, from 7 until 9 pm. If you are unable to attend please think good thoughts and say a prayer for Jean, her family and yours, and those that are less fortunate. Jean hated the thought of anyone being hungry, and so, in lieu of flowers, please make a donation to the food bank of your choice to help those in need. She often said, “There, but for the grace of God, go I.” And she would then give someone a meal. We know she would thank you for your donation and it would make her happy to know less people were going hungry. There will be a Memorial Mass, Burial and Celebration of Life at a later date when all can celebrate her impact on their lives and drink White Russians in her honor.

The family of Jean Ann Burns Zoani created this Life Tributes page to make it easy to share your memories.