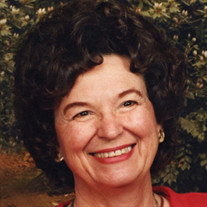 Jean Ellen Breckon Gordon, 89, passed away September 24, 2021, in Payson, Utah. She was born September 12, 1932, in Weiser, Idaho, to John Oswald Breckon and Ednah Lenore Durbin Breckon. The start of World War II took her from her quiet childhood in Idaho and Oregon to the bustling streets of San Francisco while her father went to school and worked in the Naval shipyard. San Francisco opened up a whole different world for Jean with museums, parks, theater, symphonies, and education. She was friends with people from many different cultures. From the time she was young, she wanted to go to college. She excelled in her classes of French and Latin, mathematics, and literature, and had a great love for music and all sciences. Her lifetime subscriptions to scientific magazines and her bookshelves full of books about philosophy, history, and religion testify of her continual desire to learn more about the world. Jean became friends with James Douglas Gordon, Jr. (Doug) when they were partners in a biology class. She always told her family that she knew she wanted to marry him because he had such an active mind. He shared her great love for continual learning. They were married on August 29, 1952, in the Salt Lake Temple. They were married for 59 years before he passed away in 2011. Jean was a loving wife, mother, grandmother, and great-grandmother. She deeply loved her family and friends. She was known for her kindness and compassion to others. She served faithfully in The Church of Jesus Christ of Latter-day Saints. Jean loved to see new places, and she delighted in spending summers in the redwoods and the mountains. She and Doug had many adventures traveling in the United States and European countries, which she treasured. Before marriage, Jean attended San Francisco State College. She and Doug moved to Redding, California, in 1953, where Doug worked as a high school teacher. When Doug contracted TB in 1955 and couldn’t work for a while, Jean decided it was important for her to finish her college education. She made the 140-mile round trip for three years to finish her education at Chico State. Jean taught in elementary schools and a junior high school. She continually took classes to become certified as a reading specialist. She traveled to multiple schools, using her love and specialization to help many children learn to read. She loved teaching others, and changed many lives in the 25 years she was a teacher. She is survived by her siblings: Jo Ann (Terrance) Anderson, Gary (Mary) Breckon, Garth Breckon, and Kathleen (Glen) Hartle; her children: James (Nadine) Gordon, Alison (Richard) Selfridge, and Scott (Sheri) Gordon; 17 grandchildren; and 35 great-grandchildren. Three great-grandchildren preceded her in death. Memorial services will be private.

The family of Jean Ellen Breckon Gordon created this Life Tributes page to make it easy to share your memories.