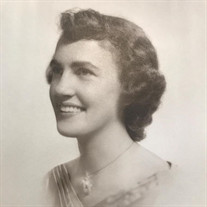 Jean Noyes left this world from North Ogden, UT to join her eternal family on January 14, 2022 at the age of 91. Jean was born September, 20, 1930 in Lansing, MI, the youngest of three children, to Willam Noyes and Eunice Noyes (née Dorner). A child of the Midwest, her family moved from Lansing to Aurora, OH and then to Barrington, IL during her childhood and teen years. Jean attended Purdue University and worked as an kindergarten teacher before her marriage to Gerald S. Lindeman of Rockford, IL on July 13, 1953. Jean and Gerry settled in Waukegan, IL for a few years, then moved to Arlington Heights, IL, Summit, NJ, and finally Mt. Prospect, IL while they raised their two children, Jeff and Vickie. Jean and Gerry dissolved their marriage in 1987, and Jean moved to Dunwoody, GA, living there until 2013, when she moved one last time to North Ogden, UT in order to be close to her son. Throughout her long life Jean was an active personality and an eager learner, always on the go and wanting to learn new skills and “how things work”. In grade school she wanted to be an airplane mechanic at a time when this occupation was not open to women. While this wasn’t possible for her, she was always able to figure out how to repair just about anything that broke around the home. She enjoyed painting, dance, and would always plant a beautiful flower garden wherever she lived. She was always dressed in stylish outfits thanks to her long career at Lord and Taylors and Pendleton and loved to drive around the mountain roads of North Georgia and Utah in her Miata. A life long Methodist, she none the less decided to be baptized a member of The Church of Jesus Christ of Latter Day Saints at the age of 89. Jean is preceded by her parents, William and Eunice Noyes, her sister Nancy Fullerton and her Brother Jack Noyes. She is survived by her children Jeff Lindeman and his wife Nancy, her daughter Vickie Victor and her husband Mike, her six grand children, Kristen Lindeman, Hillary Hopson, Evan Lindeman, Jennifer, Melissa, and Mathew Victor and her six great grandchildren: Oliver, Jude and Margot Hopson, Lydia and Maxwell Lindeman, and Wyatt Victor. In light of current conditions, there will be an informal celebration of her life held at the home of Jeff Lindeman in Liberty, UT in July.

Jean Noyes left this world from North Ogden, UT to join her eternal family on January 14, 2022 at the age of 91. Jean was born September, 20, 1930 in Lansing, MI, the youngest of three children, to Willam Noyes and Eunice Noyes (née Dorner).... View Obituary & Service Information

The family of Jean Noyes created this Life Tributes page to make it easy to share your memories.

Jean Noyes left this world from North Ogden, UT to join her eternal...