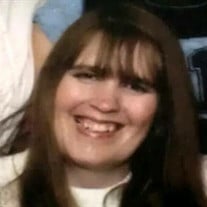 Jeannette Gordon On Friday, February 10, 2017 Jeannette Madson Gordon, 56 years of age, passed away after gracefully and without complaint living with M.S. for many years. She was born April 5, 1960 in Payson to Raydon and Iris Madson. She was the third of eleven children and married Russell Gordon January 19, 1985. They had three children, Jamie, Lindsey, and Kelli. And, she was a stepmother to Tonya and Nick. Jeannette is survived by her five children, six grandchildren, mother and ten siblings. Her dad preceded her in death by just two weeks to the hour. He was there to greet her as she crossed the veil. Jeannette loved her children and lived for them. They were her whole world and everything she did was for them. She wrote many stories and many of them were written about, for, or around an event of at least one of her kids. Jeannette Graduated from Payson High School and then Snow College. She went on to go to “The Tech” as she called it and they recommended her for employment at the American Fork Training School where she worked until her illness made it so she could no longer work. She loved horses and even took a class at Snow College on horse management. She brought her horse with her and was in the Rodeo Club. When she graduated and it was time to bring the horse home, something happened and there was no trailer to use so Jeannette rode the horse all the way home to Payson from Ephraim. She often rode her horse alone in the mountains which made her mom nervous. She often came home with stories about how her Arabian, Pretty Girl, was more sure-footed, and could and would go more places than some of the Quarter Horses she came across. The riders that challenged her were always amazed. She was devoted to the Church of Jesus Christ of Latter-day Saints and magnified every calling she had and loved when her visiting and home teachers came. And, they were always wonderful. Again, Jeannette was known and loved by many and most that knew her say that she never and I mean NEVER complained about the things she couldn’t do or the pain she was in. She was always grateful for the help and care she had. Funeral Services will be held Wednesday, February 15, at the LDS Church at 681 East 500 North at 11:00 a.m. There will be a viewing before the funeral from 10:00 to 10:45 a.m. at the same location. Interment will be at the Payson City Cemetery.

Jeannette Gordon On Friday, February 10, 2017 Jeannette Madson Gordon, 56 years of age, passed away after gracefully and without complaint living with M.S. for many years. She was born April 5, 1960 in Payson to Raydon and Iris Madson.... View Obituary & Service Information

The family of Jeannette Gordon created this Life Tributes page to make it easy to share your memories.