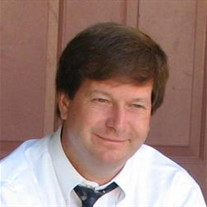 Jeffery Ernest Demke passed away April 7, 2015 surrounded by family at home. Jeffery was born November 6, 1957 to Wilford Jacob Demke and Barbara Eleen Johnson of West Covina, California. Growing up, Jeff loved the outdoors and would go camping or hiking any chance he got, a hobby that continued into his adult life. Jeff especially loved scouting and earned the ranking of an Eagle Scout prior to serving a mission to Billings, Montana for The Church of Jesus Christ of Latter-day Saints. Jeff married Loretta Blocker for time and all eternity in the Los Angeles Temple on September 2, 1981. They lived in West Covina until 1988, when they moved to Provo, Utah. Family was Jeff’s highest priority and he attended every activity each of his seven children participated in. He would take his family on summer backpacking trips and found every opportunity to teach his children life lessons and gospel principles. Jeff took a special interest in family history, and would spend much of his free time gathering stories from his ancestors’ lives. Jeff had a talent of woodworking and would bring each child to work with him. Jeff carried his love for his wife and children with him everywhere. On each job he worked he would write “Jeff loves Loretta” somewhere on the project. Jeff filled his life with service. Even after his cancer diagnoses in February 2015, he never stopped looking for ways to help others. Jeff faithfully served in many different church callings and volunteered in his community. Throughout his life, Jeff never stopped cracking jokes. His sense of humor and positivity stayed with him until the very end. Jeff is survived by his wife, Loretta; children Amber Whiting (Nick), Marie, Jeffery (Melissa), Christine, Amy Woods (Brian), Emily (currently serving an LDS mission in Berlin, Germany) and Jamie; and grandchildren Norah and Landon Whiting. Jeff is preceded in death by his father Wilford and his mother Barbara. Funeral services will be 11:00 am, Friday, April 17, 2015 at the LDS Chapel, 4775 North 300 West, Provo, UT where a viewing will be held Thursday, April 16, 2015 from 6:00 to 8:00 pm and Friday prior to services from 9:30 to 10:45 am. Interment at the Orem City Cemetery. In lieu of flowers, donations can be made to the “Jeff Demke Memorial Fund” at any Wells Fargo branch.

The family of Jeffery Ernest Demke created this Life Tributes page to make it easy to share your memories.