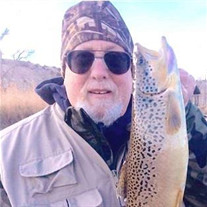 Jeffrey Lynn Brown – Riverton, Utah Jeffrey L. Brown “Hefe”, our beloved husband, father, and grandfather passed away peacefully surrounded by his family October 24, 2018. He fought a great fight as he battled metastatic prostate cancer for 8 years. Jeff was born May 11, 1949 to LaVern T. and Alda P. Brown in Salt Lake City, Utah. He graduated from Olympus High School in 1967. After graduating he joined the United States Navy and served 3 years during the Viet Nam War. After an honorable release from the Navy, he met and married the love of his life, Gloria Revill, on February 12, 1971 in the Salt Lake Temple. Jeff was a loving, devoted husband, father and grandfather. Jeff and Gloria were blessed with 4 children, J. Ryan (Trisha) of St. George, Marie (Mike) Endsley of Lehi, Heidi (Jason) Frome of Eugene, Oregon, and Preston of Riverton; 13 grandchildren whom Jeff worshipped – they were the light of his life. Jeff loved to hunt, fish, watch a good football game “Go Broncos!”, and the Utah Jazz basketball. He also loved to hunt for antiques and any good deal he could find. There wasn’t’ a task he couldn’t do or anything he couldn’t fix. He worked for J&S Mechanical as a journeyman plumber for 25 years and loved all of his co-workers. He was a member of the Church of Jesus Christ of Latter-day Saints and served in many callings. He loved his Heavenly Father and cherished his membership in His church. Jeff is survived by his loving wife, Gloria; his 4 children; 13 grandchildren; 9 brothers and sisters, Larry Brown, Randy (Cheryl), Roger (Carol Ann), Darrell (Holly), Darlene (Richard) Lamplugh, Loren (Danell), April (Brett) Wallace, Sheryl (Alan) Walker, and Kevin (Kim). He is preceded in death by his parents and his mother and father-in-law. Funeral services will be held in the Brookwood Ward, 1900 West 11970 South, Riverton, Utah on Monday, October 29th, 11:00 a.m. A viewing will be held Sunday evening from 6 – 8 p.m. at the church and Monday, 10:00 – 11:00 a.m. prior to services. Interment will be at Riverton City Cemetery. The family would like to thank Dr. Scott Samuelson, Dr. Bruce Bolonesi and all those who cared for Jeff at Cancer Specialists of Utah during his 9 years of treatment. Also thanks to Laura Sherwood from Elevation Home Health and Hospice for her tender care of Jeff.

The family of Jeffrey Lynn Brown created this Life Tributes page to make it easy to share your memories.