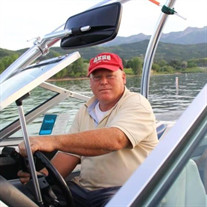 Jeffrey Blair Noorda, passed away peacefully at home on June 24, 2021, at age 62. He was born February 10, 1959, to Jacob Darwin and Marilyn Gail Curly Noorda in Salt Lake City, UT. He was the 2nd of four sons, including Darwin Terry, Gregory Scott, and Darrell Bradley. He graduated from South High School in 1977. He served as a missionary for the Church of Jesus Christ of Latter-day Saints in the Netherlands, Amsterdam Mission from 1979-1981. He earned a degree from the University of Utah in Mechanical Engineering in 1986, and a Master of Science in Management in 1995 from Troy State University. He married his beautiful sweetheart, Sue Elaine Wadsworth, on June 3, 1983, in the Salt Lake Temple. Marriage blessed by eight children, Jeffrey Scott; Melissa Sue Cook, (Aaron Jeffrey); Kent Wadsworth, (Emma Cristy Dadivas); Mary Catherine (Andrew Kimball); Natalie Blaire; Chase Joseph, (Adelle Ashby); Sarah Sue, (Remington Slagowski,) and Jacob Spencer. Worked at Hill Air Force Base as a Civil Engineer for more than 35 years. His career moved his family all over the world: Kadena AFB in Okinawa 1992-‘96 and 2001-’04; Ramstein AFB, Germany 2004-’06; Okinawa for a 3rd time, 2008-‘10; & Lakenheath AFB, England, U.K. 2010-‘13. Jeff worked hard in the service for others; he always had a project and worked from sunup to sundown. His greatest joy was working on a car or tinkering in the garage. He loved remodel projects as well. He could do anything and if there were something he didn’t know how to do, he would figure it out. Jeff loved life and lived his to the fullest. He was an active member in the Church of Jesus Christ of Latter-day Saints, and served in the Young Men’s and in Scouting for many years. Jeff is preceded in death by his father, Jacob Darwin and brother, Gregory Scott. He is survived by his wife, Sue, all eight children, and 6 grandchildren; Naomi Blaire Noorda, Aurora Blake Noorda, Dexter Sage Noorda, Cohen Jacob Cook, Conrad Jeffrey Cook, and Nolan Scott Noorda. Funeral Services will by Saturday, July 17, 2021, at 12:00 noon with a viewing from 10:00-11:30 a.m.in the Bountiful Tabernacle at 55 South Main, Bountiful, Utah. There will also be a viewing July 16 from 6:00-8:00 pm at the same location.

Jeffrey Blair Noorda, passed away peacefully at home on June 24, 2021, at age 62. He was born February 10, 1959, to Jacob Darwin and Marilyn Gail Curly Noorda in Salt Lake City, UT. He was the 2nd of four sons, including Darwin Terry, Gregory... View Obituary & Service Information

The family of Jeffrey Blair Noorda created this Life Tributes page to make it easy to share your memories.

Jeffrey Blair Noorda, passed away peacefully at home on June...