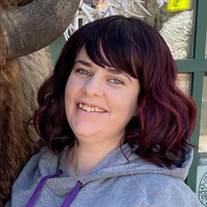 Jenessa “Jenni” Helsten (Long), 29, of Sandy Utah, passed away on April 2, 2021, in Pocatello, Idaho due to complications from type 1 diabetes. She was born to Brett and Jana Helsten on October 9, 1991 in Murray, Utah. Early in life, she showed a flair for the dramatic. She loved to perform for others. Her first performance was when she was 8 weeks old being Baby Jesus at the ward Christmas dinner (she had stage fright and started crying). She loved movies and musicals. One of her favorites was a family favorite “The Three Amigos”. She would quote lines from movies with her grandpa Soderborg and other family members. She was always reaching out to others to include them in what she was doing and trying to lift them up. In 2002, when she was in the third grade, Jenessa was involved in a theatrical group called Destination ImagiNation. She learned how to perform and have fun. Her favorite was the Instant Challenge because she had to think on her feet. Her group advanced to the National in Tennessee, which was a highlight for her in her young life. She attended Matheson Jr. High where she was involved in the Theater program and the Academic Team. Jenessa graduated from Kearns High in 2010. She loved school and being a part of drama and choir. One of her great joys was being a Madrigal and the many lifelong friends she had there. She loved performing in the school musicals. While in high school she started the journey of her health problems. Jenessa suffered kidney stones and gall stones. After many years of suffering with chronic pancreatitis she had it removed in 2017 which resulted in her becoming a type 1 diabetic. She was a trooper through it all. Jenessa was loved by many and will be missed. She was a great daughter, granddaughter, sister, niece, aunt, adopted aunt, and a friend to many. She is survived by her parents, Brett and Jana Helsten, siblings Chase, Jesse, Cameron, Emma & Braden. Her niece Joanne Ruth Helsten, Grandparents Steve and Joanne Soderborg, Grandfather Harvey Helsten and a “plethora” of uncles, aunts, and cousins. Preceded in death by Grandmother Ruth Helsten, uncles Guy Helsten and Michael B. Soderborg, and Cousin Steven T. Soderborg III. Viewing to be held Friday, April 16, 2021 from 6:00 to 8:00 PM in LDS Chapel @ 5380 West 5400 South Kearns, Utah. Funeral services on Saturday, April 17, 2021 at 10:00 AM in the LDS Chapel @ 5380 West 5400 South, Kearns, Utah. With a viewing one hour prior to the services. Burial in the Scofield Cemetery on Saturday, April 17, 2021 at 3:00 PM. There will be a celebration of her life on Saturday, June 12, 2021. The family would like to thank all the familyand friends who contributed money to make it possible for Jenessa to be returned to Utah for her funeral. We would like to especially thank her employer Younique for their very generous donation and her Great-uncle Paul Helsten for the donation of her plot.

The family of Jenessa "Jenni" Helsten (Long) created this Life Tributes page to make it easy to share your memories.