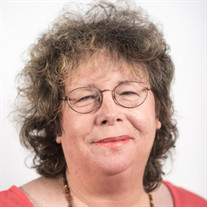 Virginia (Jenny) Louise Hill 1959 - 2016 Virginia Louise Hill, but always “Jenny”, passed away in her sleep on October 16, 2016. Jenny was born February 7, 1959 in Whittier, CA the daughter of Paul Edward Hill and Mercedes Virginia Dickey. Jenny was a wonderfully kind person, who loved making people laugh, and always made sure you knew you were cared for. She was always quick with a hug, and had an eye for seeing those who were overlooked, and hearing those who often went unheard. Everyone who came across her knew she was a kind, generous person who would give you her whole heart without wanting anything in return. For years, she held community Thanksgiving and Christmas celebrations in her home, for people in the mentally ill community who had no family to go for a holiday meal. She made them into her own family, and organized donations from local businesses and charities to make it happen. In addition, she was very proud of her service in the Army Medical Corps, as well as her work as a nurse for the developmentally challenged, before her own challenges prevented her from working any longer. Jenny is survived by three sons: Robert Steffen, Jason (Shayla) Steffen, Richard Hopkins; four sisters: Sharon Goss, Elizabeth Abbott Susan Bradford, and Barbara Francom; former husband Patrick Hopkins; three grandchildren: Jack Steffen, Noah Steffen, and Isaac Steffen; and a large extended family of brothers-in-law, cousins, nieces and nephews, and grand-nieces and nephews. The family would also like to thank the staff of Wasatch Mental Health, as well as the members of the Wasatch House community for their many tireless hours of care and support for Jenny. A viewing will be held Monday, October 24 at 11 AM at Premier Funeral Services at 1160 N. 1200 W. Orem, UT 84057. The family has created a GoFundMe account to help offset funeral expenses at the following link: https://funds.gofundme.com/dashboard/jenny-hill-funeral-fund-2vcauvn7 .

The family of Jenny Hill created this Life Tributes page to make it easy to share your memories.